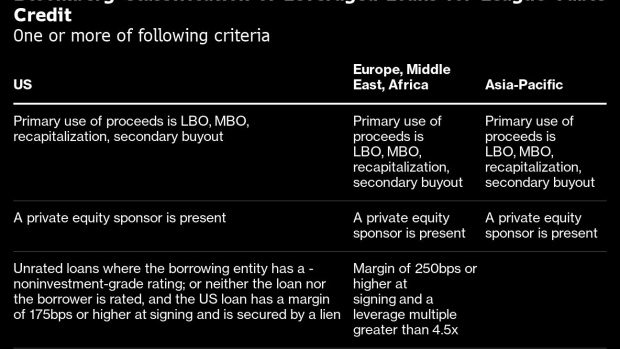 (Bloomberg Markets) -- As the once-piping-hot leveraged loan market falters in the US and Europe, Asia’s fledgling business is booming.

Asia-based banks outside Japan are enjoying one of their best years, posting a 40% year-over-year increase in sponsor-­backed leveraged loan sales by September, according to data compiled by Bloomberg. By contrast, the data show, at least 18 deals in the US and Europe were pulled in the first seven months of 2022, contributing to a roughly 50% decrease in leveraged loan sales in those regions.

Rising interest rates and the threat of recession have spooked the fund managers in the US and Europe who buy leveraged loans, which are usually made to finance leveraged buyouts of companies by private equity firms. But the comparatively tiny Asian market, which fetches roughly $30 billion a year, remains dominated by commercial banks that tend to keep the loans until the debt matures. So lenders in Asia demand that more stringent protections—known as covenants—be built into the loan terms. In exchange, they accept lower yields on the debt.

“The Asian loan market tends to be more stable and not as volatile as US or European institutional markets,” says Ashish Sharma, HSBC Holdings Plc’s co-head of Asia leveraged and ­acquisition finance. “Even during recent episodes of volatility in global capital markets, most of the Asian leveraged loans have been successfully placed.”

“Lenders in Asia are mostly corporate, commercial banks,” says Mildred Chua, managing director and global head of syndicated finance at Singapore’s DBS Group Holdings Ltd. “Lenders here are more comfortable with senior loan tranches that have priority over subordinated or junior tranches, and pricing on these senior loans may be less attractive to institutional lenders.”

While leveraged loans in the US or Europe typically come with credit ratings, albeit low ones, Asian deals are often completely unrated. Instead of relying on the judgment of the ratings companies, lenders in Asia depend on their understanding of the local market and business environment, as well as the stringent terms they build into the deals.

“Deal structures in Asia typically include maintenance covenants and amortization, and, with a few exceptions, tenors are capped at five years,” says Sharma, who’s also HSBC’s head of loan syndications for Asia-Pacific.

More than half of Europe’s leveraged loans and a quarter of American leveraged deals are “covenant-lite,” meaning the loan terms include fewer restrictions on the borrowers, providing less protection for lenders if the company runs into trouble.

In Asia deals are typically secured “by a share charge [pledge of a company’s shares] over the borrower, and everything we can get over the target business,” says John Corrin, head of international corporate finance for Australia & New Zealand Banking Group Ltd. And, he adds, leverage levels can go as high as six times a company’s earnings before interest, taxes, depreciation, and ­amortization, while that can be higher in the US or Europe.

“Asia is simply not one ‘country.’ Different currencies are used in different jurisdictions,” Corrin says. “For example, Japanese LBOs are typically denominated in Japanese Yen, and domestic Japanese banks have a strong edge in that market, given their funding capacity in JPY.” The league table shows Korean and Taiwanese banks leading this year thanks to large buyout transactions in the domestic currencies.

While bank lenders in Asia have helped to keep the market stable and growing, it’s increasingly opening up to fund managers, says HSBC’s Sharma.