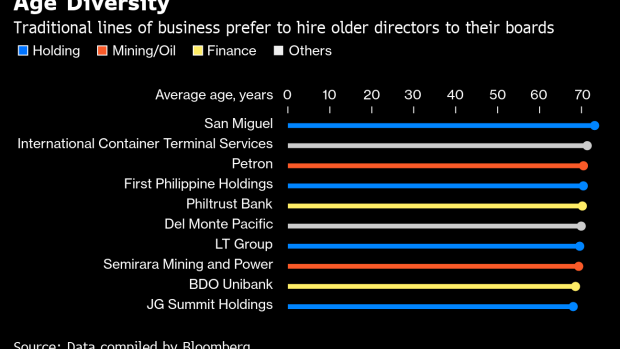 Residential and commercial buildings stand in the Makati district of Manila, the Philippines, on Thursday, Feb. 2, 2017. The Philippines is scheduled to release consumer price index (CPI) figures on Feb. 7. Photographer: Taylor Weidman/Bloomberg , Bloomberg

(Bloomberg) -- Family-led enterprises are common across Asia yet the Philippines takes such control to the extreme.

Philippine companies have the region’s oldest directors and the longest board tenures as owners and their trusted advisers keep tight hold on the reins of banking, property and retail giants. This has implications in the region’s push for greater board diversity.

Corporate directors in the country sit on boards for an average 10.6 years, more than four years beyond the average of 6.5 years in Asia-Pacific, according to data compiled by Bloomberg from more than 5,200 listed companies.

The average age of board members is also the highest in Southeast Asia at 65.4 years compared with a regional average of 58.7 years.

With some founders and their relatives staying on boards for decades, and independent directors typically handed a minority role, families are able to exercise control over a conglomerate even after it goes public.

“One of the major concerns for a family business is losing control. Once you start having a lot more independent directors, the chemistry changes at the board level,” Aon Hewitt LLC managing director for Southeast Asia Boon Chong Na said.

Companies with the longest board tenures in the Philippines are mostly led by prominent families, which is neither a cause for surprise nor concern, according to Alex Cabrera, chair of PwC in Manila.

It’s common practice for owners to stay on as long as they’re able, Cabrera said. Even when they relinquish control to their children, they do it gradually by delegating management posts before their directorships.

“They could even step down as chair but still act as chair emeritus of the board. Family members are so used to working with the veterans -- they want that,” Cabrera said. Their detailed knowledge of the business makes them well-placed to map out strategy, and their clout gives them the buy-in to pursue it, he said.

Regulators, in an attempt to make Philippine boards more balanced, prescribe that listed firms allot one-third of seats to independent directors. According to a 2016 PwC survey, six of 10 companies don’t meet the benchmark -- already set low compared with the global best practice goal that independent directors fill at least 50 percent of board seats.

Board independence is even more important in markets dominated by families in order to strengthen oversight, risk control and company performance in the long run, according to Warren Chen, Asia-Pacific research head at Institutional Shareholder Services Inc. in Singapore.

“In family-controlled firms, inevitably you will have long-tenured directors. It would be good to have independent directors with shorter tenures and fresh views to bring balance to the board,” Chen said.

“The board is the highest decision-making body of a company. You want to be able to tap the wealth of experience your directors have amassed over the years to operate a firm at that level,” he said.

Pascual said companies are starting to recognize this risk and the institute is fielding more inquiries for young, digitally savvy directors. While older directors dominate holding firms and those in banking, mining and oil, he said there is a push to hire younger in fields like technology and retail.

Still, there is plenty of room for Philippine regulators to push for greater board diversity, building on the 2016 amendments of the corporate code that prescribed a nine-year term limit for independent directors.

In Singapore, for example, similar rules on term limits and board seats for independent directors will be mandatory for all listed firms by 2022. Independent directors that extend their terms beyond nine years must face two tiers of shareholder approval, Chen said.

Continued training could also persuade companies to aspire toward more balanced boards, not only regarding tenure and age, but even gender, culture and skill set, he said.

“Leave companies alone and they will hire qualified people but at the management level to do the work,” Cabrera said, while keeping board seats among the founders and their close circle.

These families, Cabrera added, have expanded their businesses to become the country’s largest conglomerates so there is little pressure to shake things up. “When success is there, you don’t change the formula for success,” he said.

--With assistance from Jeffrey Hernandez and Michelle Jeong.

To contact the reporters on this story: Claire Jiao in Manila at cjiao5@bloomberg.net;Hannah Dormido in Hong Kong at hdormido@bloomberg.net

To contact the editors responsible for this story: Jodi Schneider at jschneider50@bloomberg.net;Cecilia Yap at cyap19@bloomberg.net