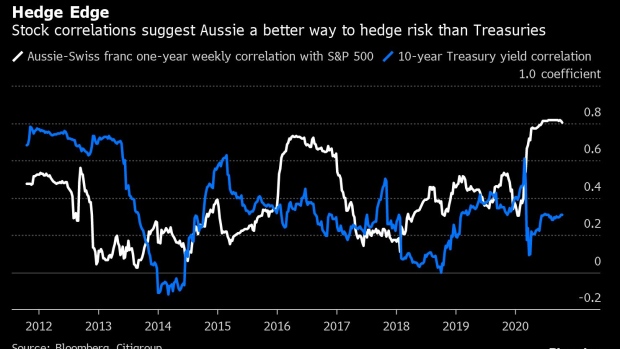 (Bloomberg) -- Money managers in Asia are deploying a range of traditional and unconventional strategies to cushion any losses as they brace for turbulence in the lead-up and aftermath of the U.S. presidential election.

Chinese equities feature high in some recommendations on expectations the vote will have a limited impact on Asian assets, while derivatives that protect against a market slide are also listed among the strategies. Several investors suggest more conventional hedges such as the yen and gold as well as just holding cash to avoid risk exposure.

And even as election fears ebb with polls showing a widening lead for Democratic candidate Joe Biden, a Bank of America Corp. survey showed global fund managers are ready for extreme market volatility as they expect the outcome to be contested.

“Global risk assets could experience near-term volatility as a disputed election could initially put downward pressure on them and cause a flight to safety,” said David Chao, market strategist for Asia Pacific ex-Japan at Invesco, which oversees $1.2 trillion globally. “A diversified portfolio makes sense, especially one that includes safe haven assets and market neutral strategies.”

Here is a selection of hedging ideas from asset managers:

“It seems rational to focus on Asia versus the U.S. to reduce election risk” given the region’s strong earnings revisions, economic recovery and attractive valuations, said Thomas Poullaouec, head of multi-asset solutions for Asia Pacific at T. Rowe Price. The region’s outperformance could continue in the short term, he added, after the MSCI Asia Pacific Index beat the S&P 500 Index by more than two percentage points in September.

Democratic Sweep in the U.S. Could Boost Asian Stocks

Invesco and State Street Global Markets continue to favor Chinese equities because of the country’s faster pace of economic recovery and high exposure to technology names. And a Biden win would signal less chaos in relations with the U.S., “which would be positive for the Chinese stock market,” said Mark Matthews, head of Asia research at Bank Julius Baer & Co.

BNP Paribas Asset Management has turned to derivatives to protect against a slide in U.S. equities, with the S&P 500 close to an all-time high despite political uncertainty. “It is worth it to spend some of that gain on downside put protection, for which costs can be neutralized by selling upside calls at least with tenors into mid-November,” said Paul Sandhu, the firm’s head of multi-asset quant solutions and client advisory for Asia Pacific.

The Australian dollar is the tool of choice to protect core investment positions ahead of U.S. elections for strategists at Citigroup Inc.

A look at the correlations between benchmark U.S. yields and stocks suggests Treasuries aren’t as effective as a risk-off hedge as they used to be, while haven rallies in the dollar are “less potent,” a team including Jeremy Hale wrote in a note on Thursday. The Australian dollar -- especially against the Swiss franc -- has been much more correlated to stocks, leaving it better placed as an avenue to build short positions as a hedge against equity downside, they said.

Adrian Zuercher, head of global asset allocation at UBS Group AG’s wealth management arm, is optimistic about the months ahead, but still “mindful” of the risks related to the election. “So we continue to advocate holding gold, adding yield for diversification, and shifting some of our linear equity exposure into optionality which should give us positive returns in falling and rising markets,” he said.

UBS Wealth has also turned toward lagging markets which score well on valuations and reduced exposure to tech sensitive markets, he added.

“We are long Singapore which is more a value play and India which is a domestic driven market versus Hong Kong which would see pressure from a Trump victory or Thailand and Malaysia which are trade oriented,” Zuercher said.

Still, for Julius Baer’s Matthews, cash or high-grade bonds are better hedges than gold because the yellow metal has “proven this year that it is more of a risk-on asset than a risk-off one.”

Paul O’Connor, head of multi-asset at Janus Henderson Investors, expects the prospect of sustained fiscal easing under a strong Democrat government to push real bond yields higher, triggering a rotation from this year’s winning assets toward the laggards.

“We have added some exposure to reflation plays in the U.S., such as value stocks in general and U.S. regional banks in particular,” O’Connor said, adding he has taken profits in assets that have benefited from plunging real yields this year, such as investment-grade credit and U.S. tech stocks.

O’Connor expects the 10-year U.S. Treasury yield could rise to 1% fairly briskly, driven by the prospect of a sustained fiscal easing under a strong Democrat government.