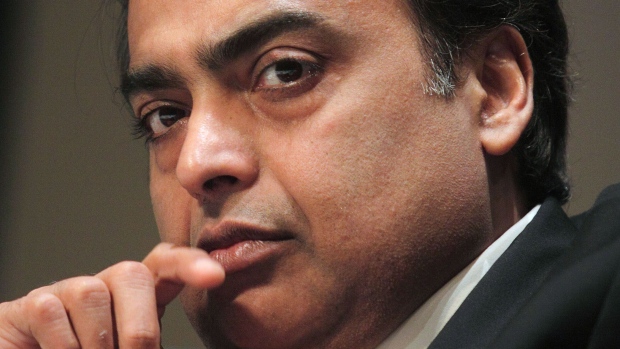 A pedestrian crosses a road as an advertisement for Jio Platforms Ltd., the mobile network of Reliance Industries Ltd., is displayed at Marine Drive in Mumbai, India, on Tuesday, July 14, 2020. Google is in advanced talks to buy a $4 billion stake in Jio, the digital arm of Indian billionaire Mukesh Ambani's conglomerate, people familiar with the matter said, seeking to join rival Facebook Inc. in chasing growth in a promising internet and e-commerce market. , Bloomberg

After securing more than US$20 billion in investment from the likes of Google and Facebook Inc., Indian billionaire Mukesh Ambani laid out a vision for his digital venture as he seeks to build a homegrown technology titan that could rival global giants.

He unveiled a slew of services, including a fifth-generation wireless network as early as next year and a mega video-streaming platform that will bring Netflix, Disney+ Hotstar, Amazon Prime and dozens of other TV channels under one umbrella.

“I believe that the time has come for a truly global digital product and services company to emerge from India, and to be counted among the best in the world,” the tycoon told the 300,000-plus people who logged into the virtual conference from 41 countries.

Ambani, 63, who inherited an oil refining and petrochemicals empire after his father’s death in 2002, is now betting on technology for future growth in a pivot away from the legacy business.

Jio Platforms, unveiled last year is now at the center of his ambitions to tap a market of more than 1 billion people, who are increasingly embracing mobile devices and data plans to shop online. Jio is eyeing an opportunity to shake up retail, content streaming, digital payments, education and health care.

Those plans would put Jio in direct competition with e-commerce giant such as Amazon.com Inc. and Walmart Inc.’s local operations. The potential for growth in India has helped Jio attract some of Silicon Valley’s top names as investors.

Alphabet Inc.’s Google is the latest to come on board, with Wednesday’s announcement of a US$4.5 billion investment for a 7.7 per cent stake that values the digital venture at about US$58 billion.

Reliance has received strong interest from investors for its retail unit and plans to induct global partners in the coming quarters, Ambani said without sharing any more details.

Here are some of the plans laid out by Ambani:

Jio, which started out as a wireless carrier as its first building block back in 2016, will roll out its 5G network once airwaves are available, according to Ambani.

Unlike other carriers, Jio will be using a technology developed locally for 5G, Ambani said, leaving it immune to political disputes linked to Chinese equipment vendors that global telecommunications companies are embroiled in.

Ambani’s speech touched on the oil business closer to the end and confirmed that the stake sale transaction in its oil-and-chemicals division to Saudi Arabian Oil Co. hadn’t progressed as planned. The much-awaited deal update triggered a slump in Reliance’s shares.

Reliance stock fell as much as 6.2 per cent Wednesday, the worst intraday loss since May 12, paring gains from a rally spurred by the investments in Jio. The shares are still more than double their value when they reached a low on March 23.