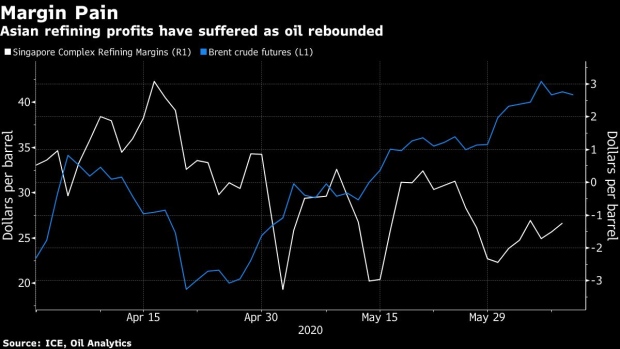 (Bloomberg) -- Fuel demand is on the mend across Asia as nations emerge from coronavirus lockdowns, but most economies in the world’s biggest oil-importing region appear unlikely to replicate China’s rapid recovery.

Chinese consumption was already back at similar levels to a year earlier in mid-May after the country was largely shut down in February. While other nations are generally a couple of months behind China in terms of the impact from the pandemic, fuel consumption isn’t snapping back as fast.

Japanese gasoline demand was still down 27% in May from a year earlier, while South Korean processors are operating at rates that are 5 to 10 percentage points lower than usual. Indian diesel sales were nearly a third lower last month on a year-on-year basis.

The drastic steps taken by China to contain the virus, which allowed its economy to bounce back faster, are one reason for the disparities. Chinese refiners also benefited from a domestic floor price that boosted margins relative to their peers. By contrast, with Brent prices doubling since April processors across Asia are now having to grapple with depressed margins.

“The crude story is certainly picking up on buying activity in the East, as refiners have stocked up on $30 dollar oil,” said Michal Meidan, director of the China Energy Program at the Oxford Institute for Energy Studies. “But I think the market is getting ahead of itself slightly” and the recovery is likely to be gradual even as driving starts to pick up again in Southeast Asia, she said.

The uneven pace of the rebound suggests that oil will find it tougher to rally from here unless consumption picks up markedly. Brent crude, the global benchmark, is on track for its first weekly drop in seven weeks.

Here’s a closer look at how fuel demand and refining activity is recovering in Asian economies excluding China: