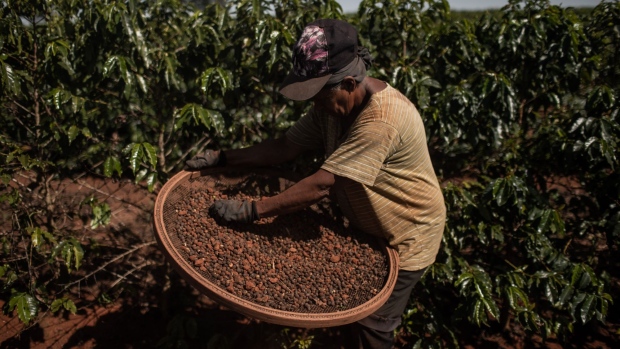 A worker harvests coffee on a farm in Alfenas, Minas Gerais state, Brazil, on Tuesday, May 28, 2019. As coffee prices globally trade near the lowest in 13 years, Brazil's coffee boom is posing huge challenges for coffee farmers in various corners of the world. , Bloomberg

(Bloomberg) -- Asia’s rapid economic recovery is shielding a major specialty coffee producer from the full brunt of the pandemic.

With markets such as Japan and South Korea emerging from the crisis before other regions, Brazil’s Ipanema Coffees has seen a sharp rebound in volume and price of its smooth tasting arabica beans, Chief Executive Officer Christiano Borges said in an interview. In fact, sales are tracking last year’s levels and the company is at 95% of its target for the year, he said.

The uneven global recovery means Asia accounts for a bigger share of Ipanema’s business -- as much as 45% of exports this year, 10 percentage points above previous years. While longer lockdowns in Europe stalled the company’s sales to premium coffee shops and restaurants, online and grocery segments blunted the impact.

“At first, it was a big scare, with some clients postponing shipments everywhere,” Borges said. “In the end, demand has migrated in terms of markets and segments, but it is still there.”

Ipanema cultivates 3,500 hectares (8,600 acres) in three farms in southern Minas Gerais. One of those is on the slopes of the Mantiqueira Mountains, where the company gathers super-specialty beans known as micro lots.

This year, Ipanema collected 103,000 bags of arabica beans. They’ve been shipped to long-term clients such as the premium arm of Starbucks Corp., Nestle SA, Japanese convenience chain Lawson and Germany’s Tchibo, which is also an Ipanema shareholder.

The pandemic has brought down the premium for specialty coffee, but Ipanema has managed to retain its differentials, the CEO said. The company’s premium varies from 20 cents a pound above New York futures to as much as five times the exchange benchmark in the case of some micro lots.

As soon as the pandemic turbulence subsidies, the company plans to revisit strategies to strengthen its presence in Asian segments such as grocery stores and large roasters, Borges said.

At some point, Ipanema may also look to expand planting outside of southern Minas Gerais to regions such as Cerrado or Sao Paulo’s Mogiana as a way of building a geographic hedge. Growing its planted area by an estimated 30% probably would require fresh funds from current shareholders or new investors, he said.