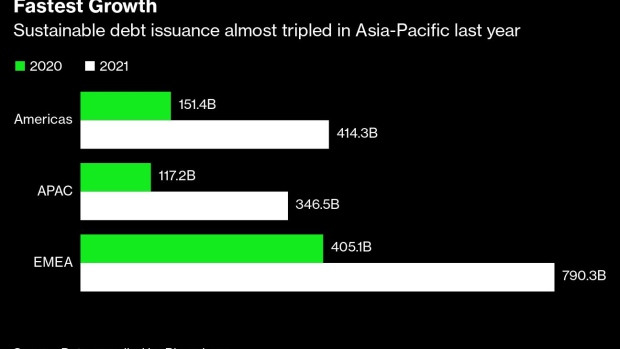 Hiro Mizuno, former chief investment officer of Japan’s GPIF, the world’s largest pension fund, has recounted how Kofi Annan once said to him that Asian nations were a “desert” of responsible financing.

That was 2019, two years after Mizuno began to champion investing based on environmental, social and governance metrics. Things have changed since then.

Asia was the fastest growing region for ESG debt issuance in 2021, according to Bloomberg data, though it was off a small base. Japan has the lowest proportion of its total managed investments that would qualify as “sustainable,” compared with the rest of the world, according to the most recent Global Sustainable Investment Review. (The rest of Asia isn’t included.) South Korea and Japan both ranked behind Sweden — which has a much smaller economy — for green bond issuance in 2021, according to the Climate Bonds Initiative.

The big question about ESG has always been whether it is meant to change the world or just manage financial risk. There’s a sense that thus far in Asia it’s much more so the latter. Will that change, as its popularity grows?

Tae-Han Kim, a senior expert at the Korean Sustainability Investment Forum, said ESG was still in the early stages in that country, and the focus was on disclosure. “Unlike Europe and the US, Korean financial institutions are not familiar with corporate engagement,” he said.

The recent emergence of climate-focused shareholder resolutions in Japan is instructive. A shareholder resolution was filed this week against J-Power, the coal-intensive Japanese power company. It’s the first such resolution in the country to be co-filed by institutional investors, after three were filed by nonprofits in the past two years. Still, all of those institutional investors instigating the J-Power resolution are Western: Amundi, Man Group and HSBC Asset Management.

A climate-focused resolution filed last year with Mitsubishi UFJ Financial Group received 23% support overall. Almost a third of institutional investors, or 20 of 69, supported the resolution. However, when it was narrowed to Japanese investors, the proportion was less than a quarter: six out of 28 voted in favor, according to Kikonet, one of the nonprofit groups involved in the filing.

Asian countries have started paying attention to ESG just as the issue of climate change — which is more time-sensitive and more aligned with financial risk — is dominant. Climate is already seen as the strongest ESG theme in the region, says Rebecca Mikula-Wright, chief executive of the Asia Investor Group on Climate Change. “With climate-aligned investing the region has the chance and motivation to leapfrog the rest of the world.”

That will require better rules. Japan’s Financial Services Agency, the regulator, is expected to release a sustainable finance action plan next month. A senior FSA official, Satoshi Ikeda, told Environmental Finance last year that one of the reasons was the need to “ensure a certain credibility of financial instruments — green bonds and social bonds issued in Japan.”

That same need to ensure credibility of green financial products and instruments is driving new measures in other parts of the world. Regulators are loath to tell investment managers to do anything that might stray beyond narrow financial objectives, but they see a need to make financial companies back up their increasingly prolific climate pledges.

The European Commission will this year propose “minimum standards” for its “light green” fund designation, known as Article 8 funds, under its Sustainable Finance Disclosure Regulation. A group of think-tanks and non-governmental organizations have suggested that standards should include a minimum number of meetings with companies, a sustainability-focused voting policy, and a commitment to table shareholder resolutions.

The EU might be unusual in that it has sought to integrate its oversight of capital markets with its broader policy agendas, including climate change. But even in the US, where aligning financial regulation with policy could be seen as highly contentious, the Securities and Exchange Commission has proposed detailed disclosures covering, for example, the use of carbon offsets to achieve “net zero” pledges.

What may have seemed like a potentially lucrative new strand of products and services could also become a source of new rules and regulations. Asian financial institutions might do well to take note. Alluding to doing good means clients, and regulators will eventually expect to see how it’s being delivered.