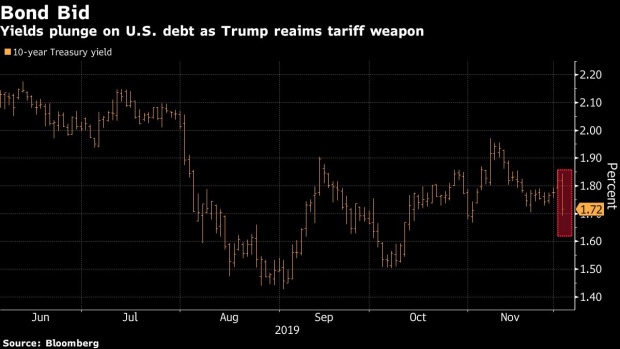 (Bloomberg) -- Stocks in Asia looked set for declines following a drop in U.S. equities and a surge in Treasuries in the wake of heightened uncertainty over this month’s upcoming tariff deadline.

Futures fell in Japan, Hong Kong and Australia. The S&P 500 Index declined for a third day, though it pared some of its losses in afternoon trading. The Trump administration signaled the U.S. plans to move forward with tariffs on Chinese goods if no deal is struck before the mid-December deadline. The president had earlier indicated he’d be willing to wait another year before striking an agreement with China. He also threatened levies on France after hitting steel from Brazil and Argentina.

Treasuries surged, driving yields down the most since August, as gold, the yen and the Swiss franc paced gains among haven assets. Australian bonds tracked the moves higher in early Wednesday trading.

“It’s very difficult to have conviction about which way the trade situation will go,” Laura Kane, head of Americas thematic investing at UBS Global Wealth Management, told Bloomberg TV. “Just a few weeks ago the news was incrementally positive, now we’ve moved more negative again, but the situation is going to stay in flux as we enter next year.”

Elsewhere, oil rose as traders focused on the upcoming OPEC+ meeting that could lead to deeper supply cuts by some of the biggest crude producers.

To contact the editors responsible for this story: Christopher Anstey at canstey@bloomberg.net, Andreea Papuc