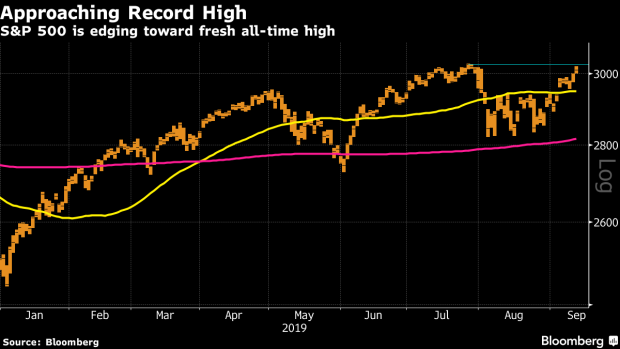 (Bloomberg) -- Stocks in Asia were primed for modest gains Friday after trade optimism continued to grow and the European Central Bank introduced a fresh round of stimulus. Treasuries slipped.

Futures in Japan, Hong Kong and Australia nudged higher. The S&P 500 rose to just under its all-time high after a report that American officials have discussed offering a limited trade agreement to China. That followed a decision by the European Central Bank to cut its main rate to minus 0.5% and buy 20 billion euros ($22 billion) of bonds a month. The yield on 10-year Treasuries extended this month’s advance to 1.77%.

Optimism over a trade deal is growing ahead of expected high-levels talks next month between the world’s two largest economies. Any interim agreement would delay and roll back some tariffs in exchange for commitments on intellectual property and agricultural purchases, people familiar said. A White House official denied the report to CNBC.

Still, the signs of progress were enough to help buoy sentiment amid expectations of further central bank easing, including from the Federal Reserve next week. The ECB changed its guidance on interest rates to say they’ll stay at present or lower levels until the outlook for inflation “robustly” converges to its goal of just below 2%.

Elsewhere, Turkey’s lira rallied after its policy makers cut interest rates by more than forecast. Oil turned lower as the International Energy Agency warned OPEC it faces a “daunting” surplus of crude in 2020.