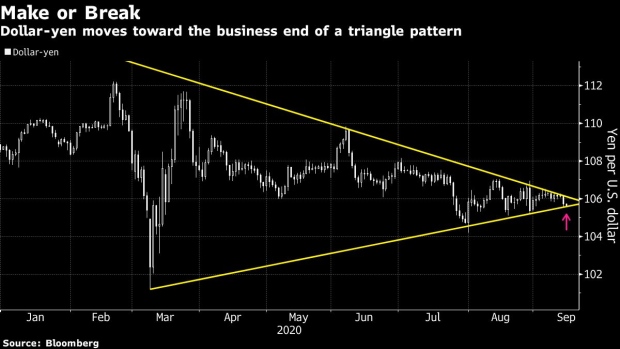 A truck passes in front of the Marathon Petroleum Corp. Galveston Bay oil refinery plant ahead of Hurricane Laura in Texas City, Texas, U.S., on Wednesday, Aug. 26, 2020. Hurricane Laura, which is roaring toward Louisiana and eastern Texas, threatens to become the eighth storm that’s Category 4 or stronger to reach the U.S. Gulf Coast in modern history. Photographer: Go Nakamura/Bloomberg , Bloomberg

Futures pointed to modest gains in Australia and Hong Kong, and were little changed in Japan, where Yoshihide Suga is set to be the country’s new prime minister later today. The S&P 500 rose for a third consecutive session, as gains in technology shares helped offset a late slide in financials. Treasuries and the dollar were little changed. Oil rose to its highest in more than a week after economic data from China to the U.S. fueled optimism that factories are getting back to work.

Investors are looking for catalysts to take markets higher after the impressive recovery in global stocks from March lows sputtered in the first half of September. The Federal Reserve is expected to maintain its dovish stance at its policy meeting Wednesday after earlier saying it will shift to a more relaxed approach on inflation. Central bank stimulus has been shoring up sentiment in the face of risks from the pandemic, the U.S. presidential election and the possibility of a no-deal Brexit.

“Given the volatility we have seen in the stock market in the last couple of weeks – as more evidence of some bubble-like characteristics in the exposure to growth stocks has been revealed – it’s hard to see a new, strong rally ahead of the U.S. election,” said Chris Iggo, chief investment officer of core investments at AXA Investment Managers.