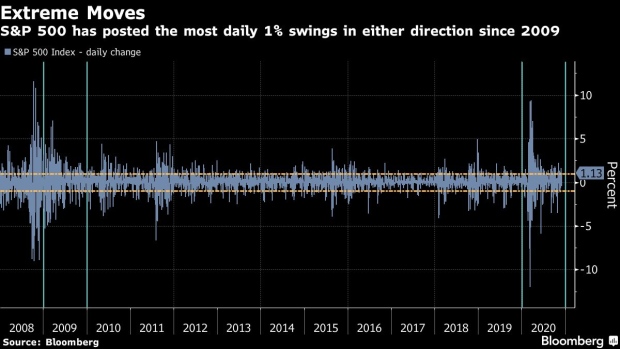 A syringe loaded with seasonal influenza vaccine, manufactured by GlaxoSmithKline Plc, at a doctor's surgery in an arranged photograph in Gelnhausen, Germany, on Tuesday, Nov. 24, 2020. The influenza viruses that infect people change constantly, so twice a year the World Health Organization makes its best guess about the strains likely to emerge the following year. Photographer: Alex Kraus/Bloomberg , Bloomberg

(Bloomberg) -- Asian stocks looked primed for gains after fresh record highs from their U.S. peers as a renewal of aid talks added to optimism over progress on coronavirus vaccines. The dollar extended its slide to a more than two-year low and Treasuries slumped.

Futures pointed higher in Hong Kong, Japan and Australia as the risk-on mood looked set to extend into Wednesday. House Speaker Nancy Pelosi delivered a new proposal for a stimulus package and Senate Majority Leader Mitch McConnell said he is circulating among Republicans his own revised plan, which has the backing of President Donald Trump. President-elect Joe Biden urged Congress to pass a relief package. Benchmark Treasury yields climbed back above 0.9%.

Elsewhere, oil fell the most in two weeks as tensions between OPEC members heightened the uncertainty of the group delaying its planned output increase. Gold advanced, while Bitcoin retreated after almost reaching $20,000 for the first time.

After a record month for global stocks, there’s no sign the rally that’s been fueled by vaccine breakthroughs is losing steam. Pfizer Inc. and partner BioNTech SE have sought regulatory clearance for their Covid-19 vaccine in the European Union and BioNTech said it could start shipping the first doses “within hours” after approval.

“Markets are closing out a phenomenally volatile year in a euphoric manner,” Kathryn Rooney Vera, chief investment strategist at Bulltick LLC, said on Bloomberg TV. “Markets are in a full bull scenario.”

Despite the optimism, Federal Reserve Chairman Jerome Powell cautioned lawmakers that the U.S. economy remains in a damaged and uncertain state during testimony at a Tuesday hearing before the Senate Banking Committee.

These are some key events coming up:

Here are some of the main moves in markets: