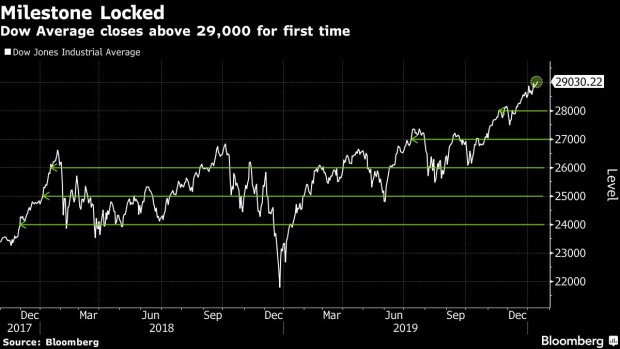 Futures nudged higher in Japan, Hong Kong and Australia. The S&P 500 Index climbed as investors took solace from an easing of tensions between the world’s two largest economies, though ended the session off its high. Soybeans slumped after China signaled purchases would be demand based. The dollar dipped and Treasury yields retreated.

The deal commits China to do more to crack down on the theft of American technology and corporate secrets by its companies and state entities. It also binds Beijing to avoid currency manipulation to gain an advantage and includes an enforcement system to ensure promises are kept.

“A lot of the trade deal has been priced into markets already,” Tracie McMillion, head of global asset allocation strategy at Wells Fargo Investment Institute Inc., told Bloomberg TV. “It represents that the U.S. and China can come to an agreement and that is no small feat and a very important first step.”

Elsewhere, Russia’s ruble weakened. President Vladimir Putin replaced his long-serving prime minister and called for sweeping constitutional changes, fueling speculation that the Russian leader is moving to extend his grip on power beyond the end of his term in 2024. Oil drifted, with West Texas Intermediate crude trading around $58 a barrel. Gold nudged higher.

There are some of the main moves in markets: