We expect growth will come back with a little more volatility: Som Seif

An afternoon rebound for stocks proved short-lived, with major averages ending lower as investors remained on edge over the Federal Reserve’s inflation-fighting stance and Russia’s saber-rattling against Ukraine. Selling worsened after the close as disappointing tech earnings sent futures plunging.

In another jittery session, the S&P 500 closed at the lowest since October, with technology shares weighing heavily on the market. The gauge briefly erased losses as dip buyers resurfaced to snap up bargains after a slide of nearly 3 per cent earlier in the day. Unlike Monday, the index failed to stage a dramatic comeback. In fact, there have never been two consecutive sessions when it drew down at least 2 per cent from the previous day’s close to finish higher, according to data compiled by Bloomberg going back to the early 1980s. In late trading, an exchange-traded fund tracking the Nasdaq 100 plunged more than 1.5 per cent after Microsoft Corp. reported a slowdown in cloud growth.

The risk of a “growth shock” to equities is increasing, according to Goldman Sachs Group Inc. strategists. Ahead of Wednesday’s Fed decision that’s expected to point toward a rate hike in March, they warned that sharp monetary tightening to tame inflation could eventually have knock-on effects on economic activity, hurting stocks. The International Monetary Fund cut its world growth forecast for 2022, citing weaker prospects for the U.S. and China along with persistent inflation. 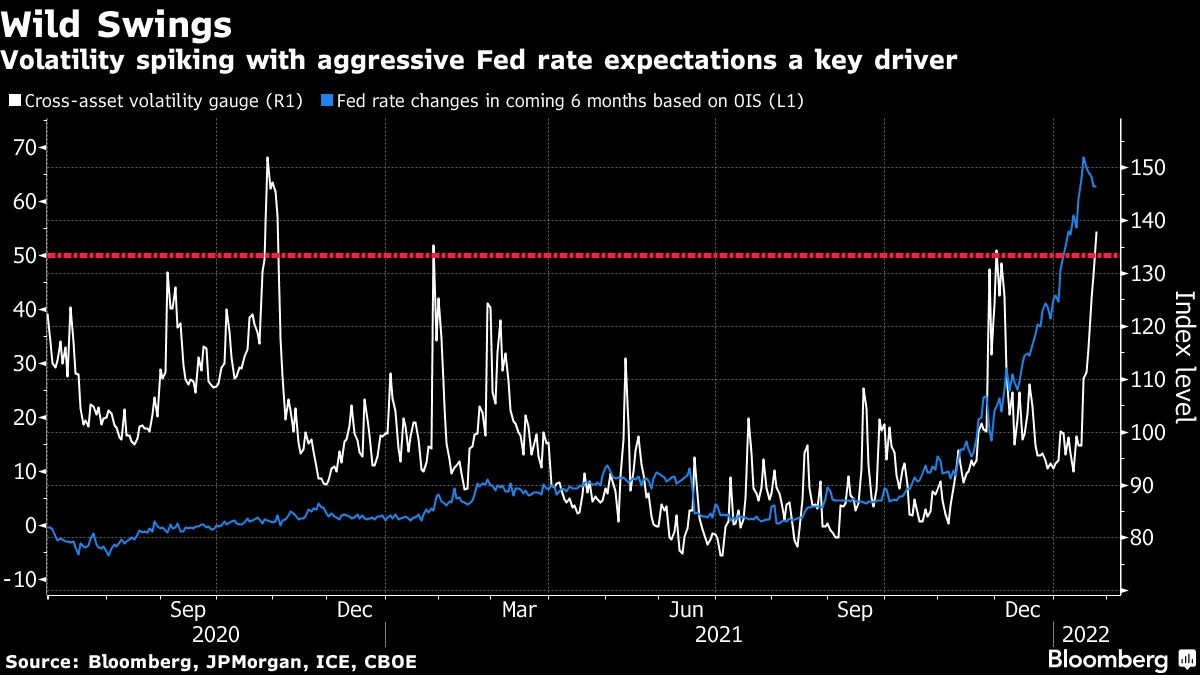 On the geopolitical front, Deputy Treasury Secretary Wally Adeyemo said the U.S. and its European allies have economic sanctions “at the ready” in case Russian troops invade Ukraine. A Kremlin spokesman warned that a White House move to put as many as 8,500 troops on alert “exacerbates tensions,” while top Biden administration officials said reinforcements for North Atlantic Treaty Organization forces in Eastern Europe and potential sanctions on Russia are ready to go.