U.S. stocks fell for the first time in three sessions and the dollar weakened as investors mulled risks to the economic outlook including inflation and a spike in COVID-19 cases in parts of the world.

Technology and communication services led the benchmark S&P 500 into the red, while energy shares rose. Apple and Microsoft weighed on the tech-heavy Nasdaq 100. Semiconductor stocks continued to be under pressure, with the Philadelphia Semiconductor Index dropping as low as 10 per cent from a peak in early April.

“Investors should brace for further bouts of volatility, driven by inflation data along with other risks, such as setbacks in curbing the pandemic,” wrote UBS Global Wealth Management’s Chief Investment Officer Mark Haefele. “But we don’t see inflation concerns ending the rally in stocks, which we expect to be led by cyclical parts of the market as the global economic reopening broadens.”

Oil edged up as rising optimism around a demand recovery in regions such as the U.S. offset COVID-19 flare-ups in parts of Asia.

Bitcoin tumbled to as low as US$42,133 before stabilizing after a volatile weekend that saw Tesla Inc. Chief Executive Elon Musk whipsaw prices with a series of tweets that touched on the energy usage of the cryptocurrency and whether he was selling. Coinbase Global Inc. fell to a record low and below the reference price used in its April direct listing. Gold climbed to the highest in more than three months. 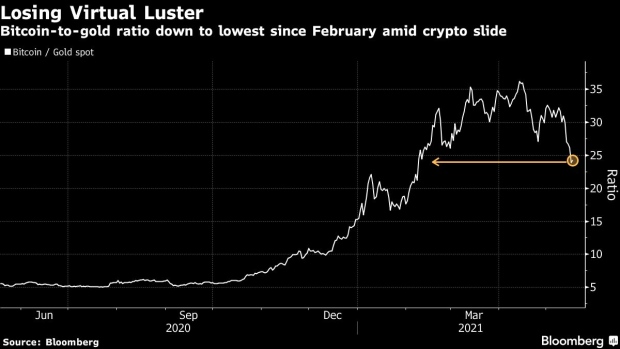 Federal Reserve Vice Chair Richard Clarida said during a webinar that weaker-than-expected April payroll report shows “we have not made substantial further progress” on the central bank’s goals for employment and inflation laid out as thresholds to begin scaling back the central bank’s massive monthly bond purchases.

Concerns that policy makers may have to pull back support sooner than expected to quell rising inflation have weighed on global equities. Investors this week will parse the minutes from the Federal Open Market Committee’s latest meeting for any discussion about accelerating price pressures, and hints of a timeline for reducing asset purchases.

“Expect this volatility to continue as the market searches for direction,” said Mike Loukas, chief executive officer at TrueMark Investments. “The release of the Fed minutes on Wednesday will be interesting. With earnings season almost over, inflation will continue to hold center stage.”

Elsewhere, the Stoxx Europe 600 Index edged lower and stocks in Asia were mixed.