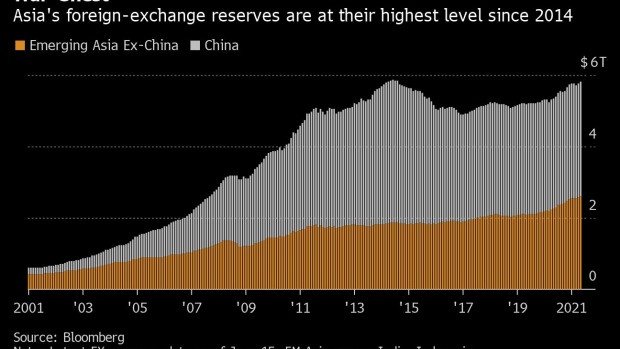 A vehicle passes by the Marriner S. Eccles Federal Reserve building in Washington, D.C., U.S., on Monday, May 3, 2021. President Biden's $4 trillion vision of remaking the federal government's role in the U.S. economy is now in the hands of Congress, where both parties see a higher chance of at least some compromise than for the administration’s pandemic-relief bill. Photographer: Stefani Reynolds/Bloomberg , Bloomberg

Central bank holdings of foreign currencies in the region’s fast-growing emerging economies hit $5.82 trillion as of May, their highest since August 2014. When China’s cash pile is stripped out, emerging Asian central banks’ reserves stood at an all-time high of $2.6 trillion.

While some of the gains reflect dollar weakness and bumper exports, policy makers are deliberately preparing their defenses, said Nicholas Mapa, an economist with ING Groep NV in Manila.

“Emerging economies are definitely learning from the past by war-chesting,” Mapa said. “They’re all the more aware of the eventual reversal in monetary policy stance of developed market central banks and the potential repercussions that may arise from a Fed taper or eventual rate hike.”

While the Fed is expected to maintain a dovish outlook when it meets this week, economists say the accelerating U.S. recovery means the bank will need to signal a policy turn sooner than anticipated. Central banks in South Korea and New Zealand already have said their improving economies may eventually justify higher interest rates.

A signal from then-Chairman Ben Bernanke in 2013 that the Fed would begin winding down asset purchases sent shockwaves through Asia, an episode that came to be known as the “Taper Tantrum.” Foreign investors fled and bond yields shot up, forcing central banks to burn through their defenses to protect their currencies. Rising yields have historically triggered currency volatility and driven up borrowing costs in the region.

Any hint of a Fed shift on tapering will quickly test defenses including current-account surpluses and foreign-exchange holdings, said Tuuli McCully, head of Asia-Pacific economics at Scotiabank.

“There are significant differences between regional countries, and some will be more vulnerable than others to any financial market volatility and capital outflows,” she said, citing Malaysia and Indonesia as countries with lower reserve coverage ratios than their peers.

Still, this time around Asian central banks can meet any shift from Fed Chairman Jerome Powell with a wall of currency firepower.

China’s foreign-currency holdings rose to their highest level in five years in May at $3.22 trillion, on the back of a weaker dollar and increased portfolio inflows.

India’s authorities, still scarred by the Taper Tantrum, have built up record foreign-exchange reserves worth more than $600 billion. Earlier this year the country’s reserves briefly surpassed Russia’s to become the world’s fourth-largest, as the central bank hoarded dollars to cushion the economy against any sudden outflows. Reserve Bank of India chief Shaktikanta Das has said the buffer will help insulate Asia’s third-largest economy from global spillovers.

In the Philippines, central bank reserves are forecast to reach a record $114 billion this year, while Taiwan’s holdings rose to $542.98 billion in May, just short of February’s record. South Korea’s rose to a record $456.46 billion in May.

Indonesia’s reserves fell from a record-high to $136.4 billion in May, their lowest level in five months, as the government paid off external debt. The central bank, which will decide on its policy rate right after the Fed meeting, is expected to stand pat to shield the battered rupiah from further foreign outflows.

“Compared to 2013, regional countries, particularly the most affected, are in a less vulnerable position,” said Radhika Rao, an economist at DBS Bank Ltd. in Singapore.