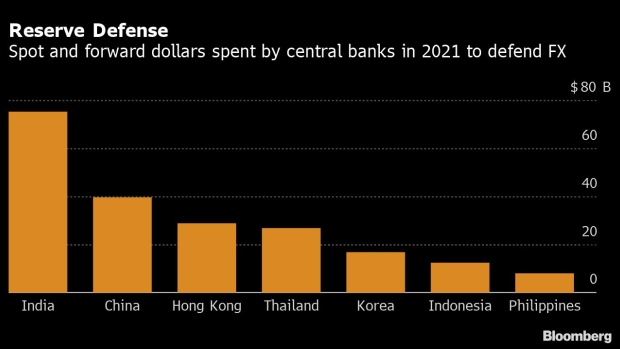 Travelers in front of a Shinhan Bank currency exchange booth at Incheon International Airport in Incheon, South Korea, on Thursday, Sept. 8, 2022. South Korea’s won bounces back from a 13-year low after the Bank of Korea issued verbal warnings against the weakening currency. , Bloomberg

Some of the potential methods they may choose include mandating exporters to sell foreign-currency proceeds, placing restrictions on trade accounts, and introducing measures to boost capital inflows, Nomura analysts including Sonal Varma in Singapore and Ting Lu in Hong Kong wrote in a research note.

Asian policy makers have bolstered their FX warchests in recent years following previous crises such as the 2013 taper tantrum. Still, the rapid pace of Federal Reserve interest-rate hikes this year means they will be reluctant to rely solely on those funds to defend their currencies.

India is already estimated to have spent $75.1 billion this year supporting the rupee in the spot and forward markets, while China has probably spent $39.6 billion, Thailand $26.9 billion and South Korea $16.7 billion, according to Nomura’s estimates to the end of August. Both the Reserve Bank of India and Bank of Thailand have used up more than 10% of their end-2021 headline reserve levels, the bank said.

“Asia still has FX reserves to prevent runaway depreciation, but amid the erosion of FX reserve buffers, we believe we are closer to a point where some Asia ex-Japan central banks may allow for greater FX flexibility,” the Nomura analysts wrote.

Asian currencies have tumbled this year as Fed rate hikes have bolstered the dollar. The yen has slumped more than 20% to a 24-year low, the Korean won has fallen 17%, and the Philippine peso and Taiwan dollar have both dropped more than 13%.

Here are some steps that Nomura suggests individual Asian central banks may take to support their currencies: