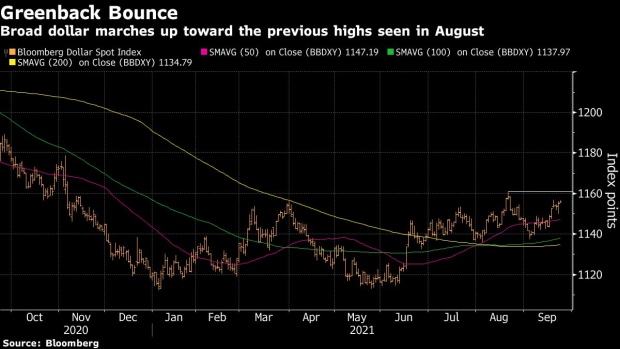 The portrait of Thai King Maha Vajiralongkorn is displayed on Thai baht notes at a shrine at the Wat Rong Seur Ten temple in Chiang Rai, Thailand, on Friday, Jan. 4, 2019. Thailand's most powerful tropical storm in decades impeded oil production and flights, leaving thousands of tourists stranded near the nation’s southern beaches. Pabuk disrupted the peak period for the Thai tourism industry, which makes up for about a quarter of the country's economy. Photographer: Brent Lewin/Bloomberg , Bloomberg

(Bloomberg) -- Most emerging-Asian currencies weakened against the greenback, with the Thai baht hitting the lowest level in four years, as the dollar advanced after the Federal Reserve said taper could start “soon.”

Asian currencies have been weighed down by the hawkish tilt from Fed Chair Jerome Powell, who on Wednesday signaled the bond tapering is expected to start in November and would be completed by mid-2022, which is slightly faster than the previous tapering cycle in 2014 which lasted for 10 months.

“The FOMC was a bit more hawkish than expected, pushing the U.S. dollar higher,” said Khoon Goh, head of Asia research at Australia & New Zealand Banking Group Ltd. in Singapore. “With the FOMC now out of the way, news around China Evergrande will dominate market sentiment.”

The Korean won led losses in Asia as it fell as much as 0.9% against the dollar, partially playing a catch-up as onshore markets return from a three-day holiday, while the Philippine peso and baht were also among underperformers, with the Thai currency falling to a four-year low.

In addition to signaling the start of taper, the Fed’s median dot plot projections now show officials are evenly split on whether to raise the federal funds rate as soon as the next year, while in June, the median forecast indicated no rate increases until 2023.