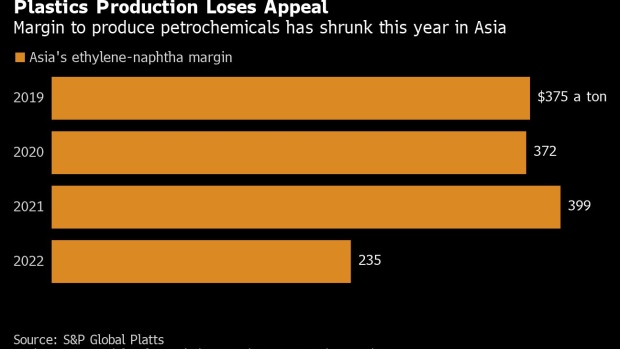 (Bloomberg) -- Plastics demand may not recover for another year, meaning the petrochemicals used to make them will trail the rebound in transport fuels in a blow to mainly Asian refineries.

Consumption probably won’t return to the peak recorded in the last quarter of 2021 before the end of 2023, according to Mukesh Sahdev, the Sydney-based head of oil trading at industry researcher Rystad Energy. That’s in contrast to road fuels, which may recover to pre-virus levels after a slowdown by the second quarter, he said.

Petrochemicals are missing out on the rally seen in other segments, such as diesel, jet fuel and gasoline earlier this year. While transport fuels benefited from a global re-opening after pandemic lockdowns in most of the world and reduced refining capacity, petrochemicals are more reliant on growth in virus-wracked China.

The sluggish demand for plastics is bad news for petrochemicals companies, which have seen their margins to turn naphtha into ethylene -- the key component of plastics -- decline to the lowest in years. The additional supplies of Russian naphtha into Asia after the war in Ukraine upended trade flows are no longer of as much concern to producers, which are feeling more pressure from the slowing economy in China and the rising risk of a global recession.

China comprises around 40% of global petrochemicals demand. The nation’s brimming stockpiles may start easing by the third quarter of next year, and a recovery in the real-estate sector could thin them further, according to Sahdev.

The oil market is closely watching China for signs it will relax its harsh Covid Zero curbs and re-open its economy. Beijing said on Tuesday that it will bolster vaccinations among its senior citizens but stopped short of announcing mandates that helped raise inoculation rates in other countries.

After the latest virus measures, “demand is expected to remain sluggish,” said Kelly Cui, a principal analyst for petrochemicals at Wood Mackenzie Ltd. Several petrochemical processors have already scheduled maintenance in the first half due to weak earnings, she said.

In Asia, the center of global plastics consumption, the profit for making compounds used in its production has tumbled despite increased imports of cheap feedstock from Russia. The margin to make ethylene from naphtha has averaged about $235 a ton so far this year, down from about $399 in 2021, according to data from S&P Global Platts.

That’s bad news for refiners, which are increasingly geared toward producing petrochemicals on top of traditional transport fuels. Run rates for Chinese private processors, including Shenghong Group and Rongsheng Petrochemical Corp., were at 64% of capacity in the week to Nov. 24, lagging a national average of 73%, OilChem said in a note last week.

The picture in Europe is also bleak. High natural gas prices are driving up operating costs, while margins had already been compressed by the lack of Russian naphtha, according to Samantha Hartke, head of natural gas liquids at Energy Aspects. Petrochemical plants on the continent are running at historically low rates and are likely to do so well into next year, she said.

--With assistance from Andrew Janes.