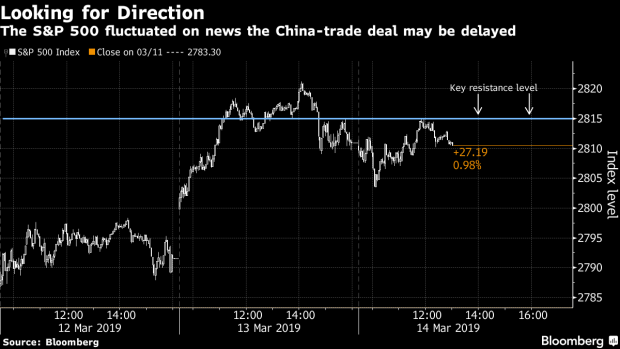 A pedestrian takes a photograph of an electronic stock board outside a securities firm in Tokyo, Japan, on Friday, March 1, 2019. Japanese shares advanced as the latest batch of U.S. data suggested the world’s largest economy is still on a solid growth track and as the yen continued to weaken against the dollar. Photographer: Toru Hanai/Bloomberg , Bloomberg

(Bloomberg) -- Asian stocks were set for a mixed start Friday as U.S. equities struggled for traction amid lingering concern that a trade deal between American and China remains elusive. Treasuries were steady and the dollar gained.

Futures pointed to small gains for shares in Japan and Australia, while Hong Kong stocks were indicated lower. The S&P 500 spent most of the session fluctuating between gains and losses in thin trading, before edging lower at the close. News that a meeting to end the trade war with China won’t happen this month weighed on sentiment. The pound steadied after strong gains earlier in the week as Prime Minister Theresa May won the endorsement of British politicians to seek to delay Brexit day.

“Most analysts believe a China trade deal is fully priced into the markets, which can mean only one thing -- if there’s a wild card lurking, it would be the emergence of a negative surprise,” Greg Valliere, the chief U.S. policy strategist at AGF Investments, wrote in a note. “While we expect a signing ceremony by later in the spring, the idea that a final pact can be completed by the end of this month is optimistic, to say the least.”

Equity markets face a hurdle from slowing global growth as investors assess whether earnings growth can withstand the current slowdown. Figures suggesting China’s slowdown deepened in the first two months of the year added to reasons for caution following this quarter’s rebound in Asian shares. Though no changes in policy are expected from Friday’s Bank of Japan’s policy decision, traders will be parsing comments from Governor Haruhiko Kuroda for detail on what next for the central bank.

Elsewhere, crude closed higher for a fourth straight day in New York ahead of a weekend meeting where the world’s top exporters will discuss whether to extend supply cuts.

Here are some of the key events coming up:

And these are the main moves in markets:

To contact the reporters on this story: Adam Haigh in Sydney at ahaigh1@bloomberg.net;Jeremy Herron in New York at jherron8@bloomberg.net