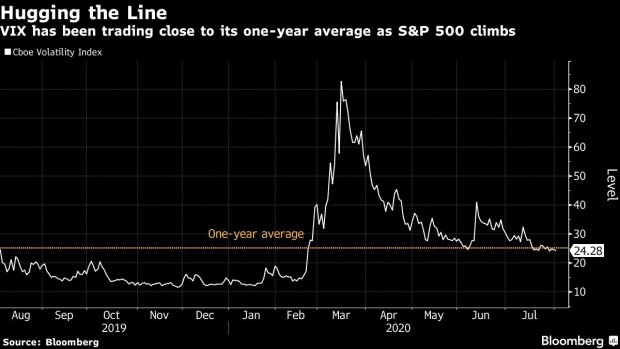 Pedestrians walk past an electronic stock board outside a securities firm in Tokyo, Japan, on Friday, Dec. 28, 2018. Japanese shares fell, with the Topix index capping its worst annual performance since 2011, in a year that saw U.S.-China trade tensions deal a heavy blow to investor sentiment. Photographer: Kiyoshi Ota/Bloomberg , Bloomberg

(Bloomberg) -- Asian stocks looked set for modest declines Wednesday as investors mulled the progress of stimulus talks in Washington and reports of a plan to review the U.S.-China trade deal. Treasuries pushed higher.

Futures pointed lower in Japan, Australia and Hong Kong. The S&P 500 Index closed modestly higher after wavering between small losses and gains throughout the day. The dollar weakened against major peers. Gold rallied to above $2,000 an ounce. Ten-year Treasury yields fell to their lowest since March.

Investors are closely monitoring efforts in Washington to hammer out a new virus relief package with pressure building as negotiators seek to shrink the wide gap that remains between Republicans and Democrats. Meanwhile, the U.S. and China have agreed to high-level talks on Aug. 15 to assess Beijing’s compliance with the bilateral trade agreement signed early this year, according to Dow Jones, citing people briefed on the matter.

On the virus front, California reported the fewest new coronavirus cases since June, while Florida and Arizona also saw their infections slow, signaling an easing in some of the U.S. states hardest-hit by the pandemic in recent weeks. In Europe, Germany, Poland and the Netherlands recorded increases in new cases.

Elsewhere, oil climbed to its highest in nearly two weeks after an explosion at Lebanon’s main port rocked the capital Beirut, stoking fears over instability in the region. Argentina’s overseas notes rallied after the government reached a $65 billion restructuring deal with creditors.