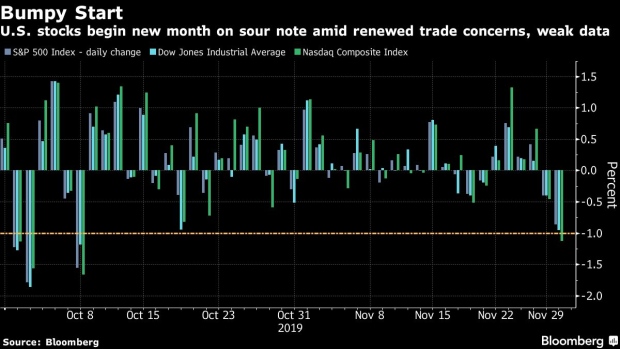 A man looks at an electronic stock board outside a securities firm in Tokyo, Japan, on Tuesday, Dec. 25, 2018. The Nikkei 225 Stock Average plunged below the 20,000 level and entered bear market territory, as Japanese equities headed for their worst December on record. Photographer: Shoko Takayasu/Bloomberg , Bloomberg

Futures in Japan, Australia and Hong Kong pointed lower. The S&P 500 Index fell the most in almost eight weeks after President Donald Trump reinstated levies on steel and aluminum from Argentina and Brazil and amid concerns the U.S. will slap fresh tariffs on China. The risk-off mood spread to Europe, where shares had the biggest slump in two months. The dollar slid against most major peers. Ten-year Treasury yields closed higher but off their intraday peak.

“This much-watched data point certainly doesn’t justify the equity rally in any capacity,” Chris Weston, head of research at Pepperstone Group Ltd. said in a note Tuesday. “The manufacturing data hit the market at a time when sellers were prevalent anyhow, with headlines around trade causing anxiety levels to rise.”

Traders also monitored the latest on retail after Black Friday hit a record $7.4 billion in U.S. online sales. American shoppers are on track to spend an estimated $9.4 billion on Cyber Monday -- a record -- boosting an already robust holiday shopping season. Yet a gauge of retailers in the S&P 500 dropped on Monday, joining broader market losses.

Elsewhere, oil rose the most in more than a week as traders sifted for fresh signals of whether OPEC and allied crude producers will tighten supplies when they meet later this week.

To contact the reporter on this story: Andreea Papuc in Sydney at apapuc1@bloomberg.net