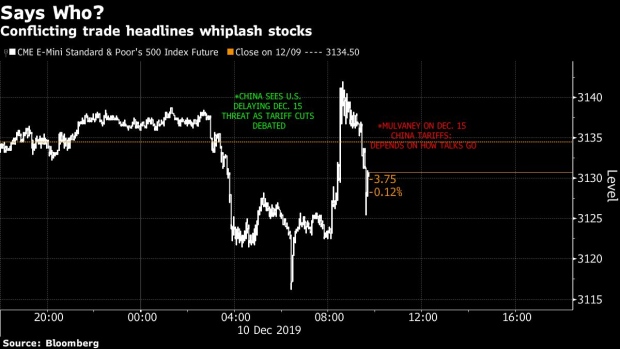 (Bloomberg) -- Asian stocks are poised for another muted open as investors debated whether China and the Trump administration will reach a meaningful trade deal ahead of the looming tariff deadline. Treasuries slipped ahead of Wednesday’s Federal Reserve meeting.

Futures in Japan and Australia were flat, and ticked higher in Hong Kong. The S&P 500 Index fell in below-average volumes as investors digested mixed signals on the likelihood of fresh tariffs on Dec. 15. Multiple reports indicated a delay was likely, before administration officials said the outcome depends on how talks progress. The two sides say a partial deal remains within reach, though the contours have not been made clear. The dollar was mixed against G-10 currencies. Crude oil fluctuated.

Trade continued to dominate sentiment on equity markets, with the dispute between the world’s two-largest economies taking much of the blame for a slowdown in global growth. The spat is overshadowing a spate of central bank meetings this week, with Fed expected to keep rates on hold and signal policy is appropriate. Meanwhile, House Democrats are expected to unveil impeachment charges later Tuesday against President Donald Trump.

Elsewhere, the pound rose ahead of a key political poll and just two days before a general election dominated by Brexit. The euro advanced while European bonds drifted lower after French and German economic data beat expectations.

To contact the reporter on this story: Andreea Papuc in Sydney at apapuc1@bloomberg.net