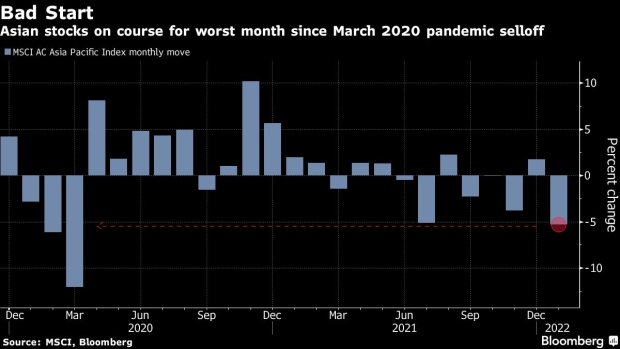 (Bloomberg) -- Asian stocks dropped by the most in over a month as hawkish remarks by U.S. Federal Reserve Chairman Jerome Powell sparked selling in the region’s technology giants.

The MSCI Asia Pacific Index fell as much as 2%, with Alibaba Group Holding Ltd. and Sony Group Corp. among the biggest drags. Hong Kong’s Hang Seng Tech Index fell more than 3%, while South Korea’s tech-heavy Kospi was on course to enter a bear market. Some financials gained after Treasury yields climbed overnight.

“Powell not ruling out raising rates at every FOMC meeting certainly seemed to have surprised the street, with seven more meetings to go for the rest of the year,” said Takeo Kamai, head of execution services at CLSA Securities Japan. “The moves in Treasury yields will likely continue to be a headache for growth stocks.”

The Asian stock benchmark is down more than 5% in January, on track for its worst monthly performance since March 2020, as traders anticipated the Fed’s hawkish move. Australian stocks were on track to enter a correction, down 10% from a recent high, while China’s CSI 300 inched closer to the 20% drop that denotes a bear market.