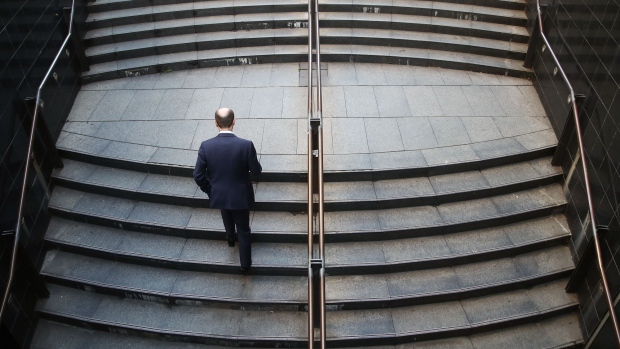 A man walks up a flight of stairs at Martin Place in Sydney, Australia, on Thursday, Aug. 17, 2017. Australian employers added more jobs than forecast in July, underscoring the central bank’s confidence in an improving labor market. , Bloomberg

(Bloomberg) -- Australia’s securities regulator plans to hire more investigators and lawyers over the next year as it steps up enforcement through the courts, Deputy Chairman Daniel Crennan said.

The Australian Securities & Investments Commission has established an Office of Enforcement and wants to strengthen its effectiveness “by accelerating court-based enforcement matters,” Crennan said in a report Sunday.

“The next year will see ASIC continue with its recruitment program to increase the number of analysts, investigators and lawyers in our ranks,” he said. “This will increase our capacity to investigate –- and where necessary litigate against -– market, corporate and financial sector misconduct.”

Australia’s government has increased funding to the ASIC after Prime Minister Scott Morrison last year said it had been “found wanting” following an inquiry that uncovered a runaway culture of greed and poor behavior among some of the nation’s biggest finance companies. The Enforcement Update released Sunday showed the number of investigations increased 20% in the year through June.

“Many of the tools are now in place to deliver a stronger legislative, enforcement and regulatory framework with tougher penalties,” Crennan said.

The ASIC is prioritizing its work on matters referred to it last year by the Royal Commission into Misconduct in the Banking, Superannuation and Financial Services Industry, as well as on a significant number of other investigations into Australia’s major financial services institutions, he said.

To contact the reporter on this story: Tracy Withers in Wellington at twithers@bloomberg.net

To contact the editors responsible for this story: Shamim Adam at sadam2@bloomberg.net, Chanyaporn Chanjaroen