MoneyTalk: Asked to be an executor? Read this first - BNN Bloomberg
{{ currentBoardShortName }}
Markets
As of: {{timeStamp.date}}
{{timeStamp.time}} 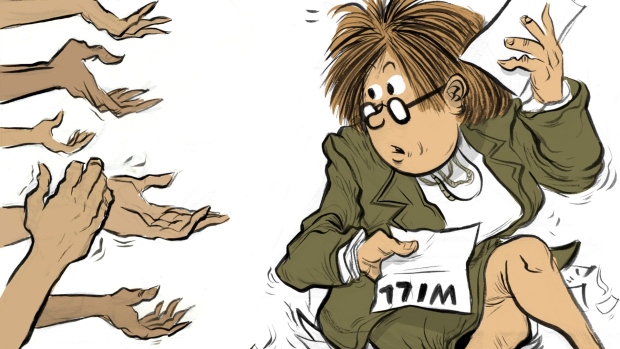 MoneyTalk - Think Twice Before You Become an Executor , Image courtesy of TD

Gemma is an obvious choice for an executor.  A retired government employee with a financial background, she knows all the ins and outs of estate planning, probate and taxes.  However, it surprised her when, out of the blue, her distant cousin, Vincent1  came to her with a copy of his will and announced that he named her as his executor. He hadn’t asked her before his will was made; he just assumed that she’d be honoured and accept.  Gemma knew that becoming an executor is a lot of work, but in the end she went along with it because, even though they are distant relatives, Gemma is one of the few family members that Vincent has here in Canada. She also thought the estate would be fairly simple to manage. “I knew that his main asset was a house in an exclusive part of the city,” Gemma relayed, “but, I didn’t know the whole picture until I was already in waist-deep.”

"Many people think it’s going to be easy. It’s only when they start to experience the conflicts or face a potential law suit that they realize it may not be so easy after all."

As Gemma learned more about the estate, she realized that it was not as simple as it seemed. Vincent willed all of his assets to people living outside of Canada, many of whom he had not talked to in years. “This worries me,” divulges Gemma. “It means that I may have a hard time locating these beneficiaries.” There were other problems too—Vincent told her he wanted to add new beneficiaries into his will, but anytime Gemma suggested he make an appointment with the lawyer to add them, he didn’t get back to her. He wanted her to be the executor and handle the administration, but Gemma realized he was “old-school” and he didn’t like being told what to do. The estate was getting more complicated. “If those new beneficiaries want a part of the estate, I will be powerless to help them if my cousin dies before the will gets updated. There will be conflict for sure that I will be in the middle of.”

Gemma’s situation, while uncomfortable, is not unusual. A survey put together by U.S. Trust found that a whopping three quarters of high net worth individuals name their family or friends as executors of their will2. The reality is that people want to give this last important task to someone they feel understands their priorities.

“People feel uncomfortable with having a person they don’t know in charge of their estate,” says Domenic Tagliola, a Wills and Estate Planner, Wealth Advisory Services at TD Wealth.

But as the U.S. Trust Survey uncovered, those who did serve as executors, had a long list of complaints: not having enough time, insufficient knowledge, and not having easy access to important information needed to carry out the functions of an executor. Saman Jaffery Ullmann, an Estate and Trust Advisor at TD Wealth says that often she is brought in after an executor has gotten in over his or her head. “Many people think it’s going to be easy,” she says. “It’s only when they start to experience the conflicts or face the potential for a lawsuit that they realize it may not be so easy after all.”

So, if a friend or family member has asked you to be their executor, here are some compelling reasons why you may wish to say “thanks, but no thanks.”

Big or Small Estate — It’s Too Much Work

Generally speaking, it will be more difficult and time consuming to execute a larger estate. But even smaller estates can have complications. Any estate may have multiple properties, numerous possessions, extensive wealth or many beneficiaries. There may be numerous steps to get through before you can divvy up the assets to the beneficiaries, including being responsible for taxes. You’ll want to ensure that the maker of the will is keeping an up-to-date list of assets and debts, including accounts, insurance policies, real estate, and all contacts –because once that person dies, you’ll have a relatively short amount of time to notify the government of ALL the assets in the estate, down to VIN numbers on cars and assessment roll numbers on property. “We use the term ‘the executor’s year’,” says Tagliola. “That means that once someone has died, it likely takes about a year to settle the estate. During that time, you’re looking at a very sizeable part-time job, and in some cases a full-time job.” What happens if the maker of the will dies and you’ve already started acting as executor, only to decide later that it’s too much to handle? Unless you’re willing to go through legal hoops, you may be on the hook.

There’s Too Much Conflict

If you are being asked to be an executor by a non-relative, you might want to consider why. As an outsider, you may have been chosen to mediate the potentially explosive conflicts about who gets what. And, it’s not just about money or expensive property. Part of the job of executor is to dole out the heirlooms of the deceased, and there’s likely nothing in writing about the teacups. “Fighting happens a lot,” says Tagliola. “It likely won’t be about money either, as you can split that down to the penny. It will be about the wedding rings and the dining room table.” Even though her cousin is still alive, Gemma is already dealing with pressure from one potential new beneficiary who is trying to claim title to the house. “It’s clear that he wants to get his hands on the house for a price that is way below market value,” she asserts, with some other choice words. “Once my cousin is gone, the plan would likely be to flip it for a substantial profit.” So, be prepared. If you are close with the beneficiaries now, you might not be after this.

When beneficiaries don’t like the decisions you’ve made, you might find yourself the subject of lawsuits. If it is shown that you haven’t used estate funds the way they were intended, you could be forced to repay those funds out of your own pocket. “Intended” is a subjective term, especially if the intentions are not clearly stated in the will. Good faith doesn’t matter a whole lot here—the road to hell is paved with good intentions. “People don’t realize that if you are the executor, you ARE the estate,” warns Tagliola. “That means that if you forgot to pay taxes or creditors before you settled the estate, you are financially on the hook.”

Ullmann says she has seen numerous executors who thought they were doing the right thing, but later found themselves in legal hot water. She cites an executor who held off selling a family cottage so that the family could have one last summer to enjoy it. It seemed like the kind thing to do. When the executor sold the cottage in the fall, the market was down and other beneficiaries in the estate sued him for not acting in a timely manner. “It is your obligation to maintain an even hand between the beneficiaries,” she says. “You can’t benefit some beneficiaries at the expense of others.”

If a friend or a relative has chosen you, one of the reasons might be that it’s cheaper than hiring a corporate executor. After all the money’s been given out, the house sold, and taxes paid, you are entitled to receive fair compensation for your time. But unless that amount has been worked into the will, you and the beneficiaries will have to work it out—another potential conflict that could very well end up in court. There are no rules about how much an executor should be paid — although a rule of-thumb is around 5% of the estate. Once the estate pays you, normally after all is settled, it is considered income by the Canada Revenue Agency, and will be subject to taxation. And if you receive the payment in a lump sum, it may push your income into a higher tax bracket.
“You could be working for pennies,” says Tagliola. “Consider whether the money you receive is worth the risk, time and conflict.”

Bottom Line: Consider Leaving it to the Professionals

Being an executor could be time consuming, legally risky, and fraught with conflict; at the end, you could even be out-of-pocket. At the very least, it could well be a thankless job. But if you don’t do it, what’s the alternative? There are professional estate executors, who have the know-how and experience in administering estates. “If you’re contemplating becoming an executor, get legal advice,” suggests Tagliola. “Know what you’re getting into ahead of time.” Suggest to the maker of the will to hire a professional to deal with his or her estate should you politely turn down the offer to be an executor.