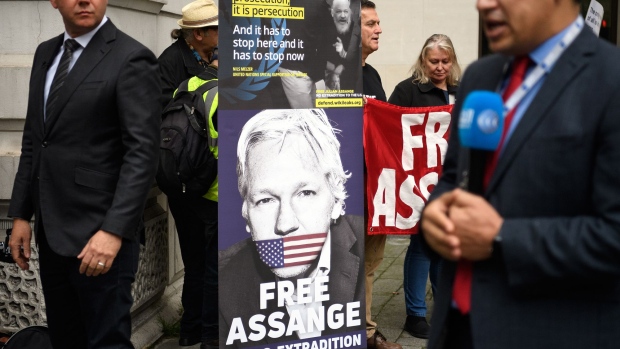 LONDON, ENGLAND - JUNE 14: Members of the media report on the story as supporters of the Wikileaks founder Julian Assange gather to show their solidarity ahead of his expected appearance by video-link at the latest hearing in his ongoing extradition case at the City of Westminster Magistrates Court on June 14, 2019 in London, England. The Home Secretary, Sajid Javid, yesterday announced in an interview that he has signed a request for Julian Assange to be extradited to the US where he faces charges of computer hacking. (Photo by Leon Neal/Getty Images) Photographer: Leon Neal/Getty Images Europe , Photographer: Leon Neal/Getty Images Europe

(Bloomberg) -- A London judge denied bail for WikiLeaks founder Julian Assange after his lawyers said he was at increased risk of catching the coronavirus in prison.

There are currently no confirmed cases at Belmarsh prison, where he is incarcerated, Judge Vanessa Baraitser said Wednesday. She added that when Assange was given bail previously, he fled.