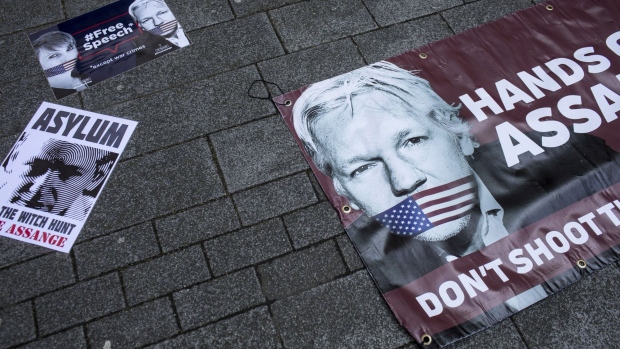 Banners in support of WikiLeaks founder Julian Assange lie on the ground outside the Westminster Magistrates' Court in London in 2019. , Bloomberg

(Bloomberg) -- Julian Assange won’t be safe if he’s extradited to the U.S., a witness for the WikiLeaks founder testified, citing the death of Jeffrey Epstein as an example of the risks for high-profile prisoners.

“Mr. Epstein was reported to have private, compromising information on many powerful people, just as Mr. Assange likely does,” American lawyer Eric Lewis said Tuesday in his witness statement. “My confidence that he will be safe from harm -- whether inflicted by himself or others -- is low.”

Assange is wanted by the U.S. on charges that he endangered national security by conspiring to obtain and disclose classified information. He has an “array of mental health problems” that make him particularly vulnerable if he were extradited, Lewis said.

Lewis compared the circumstances to that of Epstein, a fund manager worth hundreds of millions of dollars, who died in a Manhattan jail last year after being charged with sex trafficking. The New York City medical examiner ruled his death a suicide.

The Australian won’t receive adequate mental health care in an American prison because they are woefully understaffed, even when dealing with high-profile prisoners, Lewis said.

The extradition proceedings restarted at the London court after months of delay due to the coronavirus pandemic. The 49-year-old has been in a London jail for a year and a half since he was kicked out of the Ecuadorian embassy where he was hiding from Swedish sexual-assault allegations.