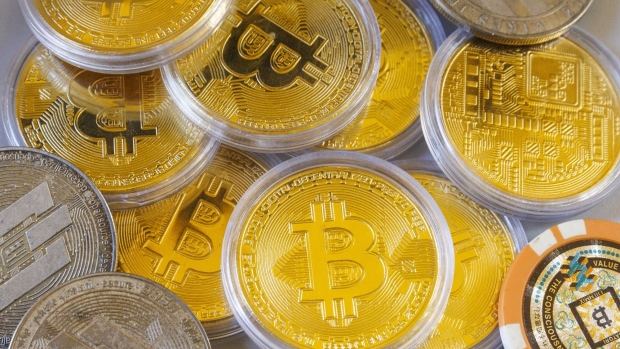 Illustrative bitcoin tokens at a Bitcoin Change bureau in Tel Aviv, Israel on Wednesday, Feb. 2, 2022. Bitcoin slipped back after touching a near two-week high, spotlighting the token’s struggle to vault a key technical hurdle and reclaim the $40,000 level. , Bloomberg

(Bloomberg) -- Around this time last year, the US’s very first Bitcoin-linked exchange-traded fund debuted, namely the ProShares Bitcoin Strategy ETF, which trades under the ticker BITO. The launch was a milestone for the digital-asset industry as it created an opportunity for more mainstream investors to dip into cryptocurrencies.

The ETF had a stellar start: it was the second-most heavily traded fund on record and gathered more than $1 billion in assets in record time. Back then, Bitcoin was trading at around $65,000 and retail investing in crypto was booming.

But in hindsight, the timing was… unfortunate. Just two months after its debut, Bitcoin started to crash. Soon after that, a collapse of crypto hedge funds and stablecoins sank the token’s trading value to about $20,000.

Bloomberg reporter Katie Greifeld joins Vildana Hajric for this episode to discuss BITO one year in.