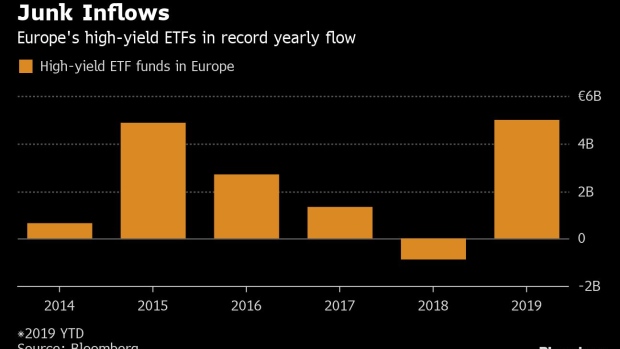 (Bloomberg) -- Warren Buffett’s warning that you only learn who’s swimming naked when the tide goes out is hardly heard these days as waves of easy monetary policy wash over the world’s financial markets.

The U.S. Federal Reserve and fellow central banks are only trying to support economic growth and spur inflation. But their embrace of lower interest rates may pump up the price of assets that are already richly valued, or stoke demand for higher yields that come with elevated risks.

“The message from the Fed is loud and clear,” said Minerd. “Their overriding concern is economic growth and extending the cycle. That’s going to open the door to the Fed possibly cutting rates aggressively this year. I think we’re setting ourselves up for a period of inflating asset prices, which ultimately will not be sustainable.”

So where are the potential naked swimmers? Here are some asset classes that are already attracting scrutiny:

The debt -- either directly or through securitized products -- usually ends up in the hands of mutual funds, pension funds, insurers and other institutional investors that are attracted to its high yields.

But leveraged loans exceeding $1 trillion in the U.S. alone have helped fuel a surge in corporate indebtedness. Research firm Covenant Review estimates that companies using them to fund buyouts and acquisitions have seen their borrowings swell to 7.7 times earnings before interest, taxes, depreciation and amortization. Four years ago, the debt-to-Ebitda ratio was just 5.5 times.

With so much money chasing a limited supply of debt, companies have been able to borrow at cheaper rates and extract generous concessions, eroding the checks and balances that protect creditors. In fact, so-called covenant-lite loans now make up a majority of the debt issued in the market.

The global yield hunt has also spilled over into markets that were once the sole domain of banks -- in particular, lending to small and medium-sized businesses that typically can’t access capital markets. The so-called private credit industry has ballooned to roughly $766 billion in assets and is on pace to hit $1 trillion soon.

Losses in private credit could dwarf those of leveraged loans in the next downturn, according to UBS. And many private debt holders are likely to need liquidity on underperforming credit positions during the next downturn, providing an opening for investors that have large cash piles, Pacific Investment Management Co. reckons.

Easy money helps keep some businesses alive that otherwise would have shut. Such firms are defined as being unable to cover the cost of servicing their debts from operating profits over an extended period and have limited growth prospects. They now represent around 6% of non-financial listed shares in advanced economies, according to the Bank for International Settlements.

The proportion of small-cap U.S. firms without earnings stood at 32% at the end of May, matching the highest level since the Global Financial Crisis, data from Leuthold Weeden Capital Management show.

Even some of Europe’s riskiest government bonds have rallied to unprecedented levels. Greece, which carried out the biggest debt reorganization in history only a few years ago, now has record-low borrowing costs, with the yield on its 10-year benchmark falling below 2% last week.

Italy saw the yield on its two-year bonds slip into negative territory earlier this month and the 10-year bond yield has been halved from over 3% earlier this year. While political risks have abated in both of these countries, they still carry a huge debt burden that has spooked investors in the past, as seen in a spike in Italian yields in May last year as liquidity evaporated.

Even some junk bonds now trade at levels where investors have to pay for the privilege of holding them. The number of such securities denominated in euros and trading with a negative yield now stands at 12, according to data compiled by Bloomberg. At the start of the year there were none.

The S&P 500 trades at 17-times forward earnings, even with a lackluster profit picture and remaining trade concerns. While that multiple may look high, it’s nowhere near bubble heights -- the same valuation measure topped 25 before the dot-com bust.

But some prominent Wall Street veterans are warning that risks are building in certain spaces. JPMorgan Chase & Co.’s Marko Kolanovic has called the performance of low-volatility versus value stocks “more significant than any relative valuation bubble” in modern history.

An analysis by Bloomberg Economics this month found the property markets of Canada and New Zealand are the most vulnerable to a correction in house prices. Australia, Norway, Sweden and the U.K. are also drawing concern, according to a “housing bubble dashboard,” which takes into account ratios of house prices to rent and income as well as inflation-adjusted prices and household credit.

City-wise, markets around the world exhibiting bubble-like characteristics currently include Hong Kong, Munich, Toronto, Vancouver, London and Amsterdam, according to research by UBS. In many areas, prices have been pushed up by a wave of investors snapping up rental properties in search of better returns.

To contact the editors responsible for this story: Simon Kennedy at skennedy4@bloomberg.net;Jenny Paris at jparis20@bloomberg.net