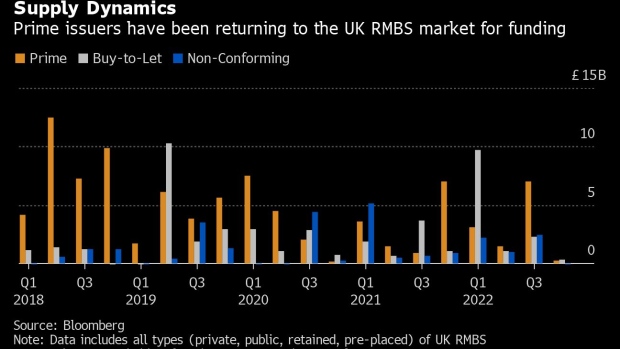 (Bloomberg) -- An asset manager that oversees more than $90 billion sees opportunities in one of the riskier parts of the UK’s mortgage-backed bond market.

BlueBay Asset Management LLP bought bonds backed by comparatively weak collateral, such as landlord-owned home debt, during the volatility sparked by September’s mini-budget and expects to purchase more as the country enters a recession, said Tom Mowl, a portfolio manager at the London-based firm.

UK home prices are falling at the fastest pace in more than two years after the Bank of England raised interest rates in an effort to get inflation under control. Borrowers there are especially vulnerable because they typically fix their mortgages for five years or less, creating opportunities for investors to profit by identifying pools of loans with stronger borrowers that will redeem in full.

Demand for property purchases has slumped by 44% since then, according to property portal Zoopla, and home loan approvals have fallen to the lowest since the early days of the pandemic.

In addition, the Bank of England’s key rate is now expected by traders to reach more than 4.5% next year, compared with 0.1% in 2021. That will have a knock-on impact on new RMBS issuance.

“Banks and lenders are tightening up their criteria, reducing their LTV and that’s just making that affordability metric more difficult,” said Erik Parker, a director in private finance sales at NatWest Markets Plc. “Because of the macroeconomic environment and the cost-of-living crisis, origination volumes quite naturally will be lower.”

Riskier transactions from non-bank or specialist lenders who dominated new sales of the bonds during the pandemic will be especially affected. These securities, known as non-conforming RMBS, are typically made up of loans to homeowners who don’t meet typical mortgage criteria from high-street banks.

Non-bank lenders have sold almost £19 billion ($22.8 billion) of debt pooling non-conforming and buy-to-let loans, while prime lenders have sold £11.9 billion so far this year, according to data compiled by Bloomberg that includes public, private, pre-placed and retained transactions.

“We expect lower supply from non-bank lenders that are clearly more impacted by current market conditions,” said Barbara Rismondo, a senior vice president at Moody’s Investors Service. Issuance this year is as much as 15% below normal conditions, she said.

Despite that, the volume of new RMBS deals is still likely to be flat or marginally down, she said.

“With the end of central bank programs, prime lenders in the UK will go back to using more securitization for funding,” she said. “It might not be as much as pre-pandemic, but definitely more than we have seen in the last few years.”

RMBS spreads remain elevated but will probably tighten in January when new flows of capital come into the market, making it a good time for issuers to sell, said Owen Muller, a vice president at the securitized products and alternatives syndicate at NatWest Markets.

At the moment, a new deal for a prime Triple-A issuer would price at about 200 basis points, Muller said. The weighted average for these transactions, which have a full capital structure, will need to drop to about 150 basis points to make it attractive for mortgage lenders to use public RMBS rather than private facilities, he said.

Still, with the economy entering a recession some investors see room for more volatility ahead. BlueBay has skewed their portfolio to reflect that there are “still a number of uncertainties around the energy situation, cost-of-living pressures and inflation,” Mowl said.

He said he bought some double-A rated non-prime RMBS at a discount of almost 10 percentage points to the original price during the market volatility.

It marked something of a return to the market for the asset manager. The firm had been “relatively cautious” on the non-conforming and buy-to-let securitized space since the end of summer last year, he said, because valuations had been squeezed in the cheap money era. That all changed in the last few months.

“The selling driven by the pension industry was clearly a very good buying opportunity,” Mowl said. “The question now is what happens if we do see delinquencies start to increase faster than people expect.”

There are no live deals in Europe’s debt market on Friday, set to be the 45th day of such inactivity this year. Companies and public sector issuers have sold about €18 billion ($18.9 billion) of new bonds this week, in line with the expectations of 40% of respondents to a Bloomberg survey.

Credit-risk gauges continued to shrink this week in Asia ex-Japan after sharp rallies in November, as risk assets including stocks posted sharp rebounds during the month.

Junk-rated credit market issuers may have to contend with a potential recession next year, which could weigh on their ability to refinance existing debt, John Wright, global head of credit investments at Bain Capital Credit said on Bloomberg Television.

--With assistance from Dale Joachim.