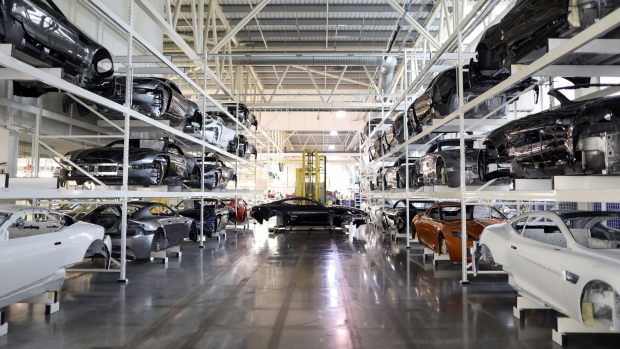 The painted bodywork of an Aston Martin DB11 luxury automobile is moved by a robot through the Aston Martin Lagonda Ltd.'s manufacturing and assembly plant in Gaydon, U.K., on Tuesday, June 6, 2017. Aston Martin may consider an initial public offering as early as next year as the British maker of James Bond’s cars seeks to capitalize on the success of Ferrari NV’s listing to lure investors, people familiar with the matter said. , Bloomberg

The British manufacturer’s shares fell 8% on Thursday, paring an earlier plunge of as much as 20%, after issuing a statement saying it regularly reviews funding options. The stock dropped almost 10% on Wednesday, when Autocar reported the carmaker could bring in a new investor and offer a position on its board. The Financial Times said Saudi Arabia’s Public Investment Fund could take a stake in the business worth £200 million ($243 million), citing anonymous sources.

“Order books are robust and have strengthened further in recent months, with sports cars sold out into 2023,” Aston Martin said in the statement.

Once pitched as a peer to Ferrari NV, Aston Martin has struggled since it went public in London four years ago. The carmaker was forced in 2020 to seek a rescue by Canadian billionaire Lawrence Stroll, who’s spent the past two years injecting vital cash and forging closer ties with Mercedes-Benz Group AG.

While Aston Martin’s plan is to expand its lineup with more iterations of the successful DBX sport utility vehicle and revitalize its sports-car lineup, deliveries of its £2.4 million Valkyrie supercar have been lagging behind schedule.

Order intake for the DBX are more than 40% higher than last year, and Valkyrie production “continues to pick up pace,” the company said Thursday. Aston Martin shares are down 65% this year.