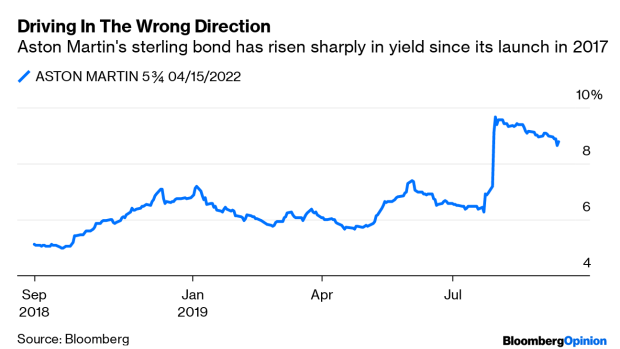 (Bloomberg Opinion) -- The maker of Aston Martin sports cars is considering raising cash from an expensive corner of the bond market. The hope must be that this is just one part of a more radical attempt to strengthen its finances — and not the last resort.

Aston has more than 800 million pounds ($1 billion) of gross debt due in 2022. Most of that is junk bonds secured on its assets. Their rating is B minus and they yield close to a punchy 9% — although trading is illiquid so that’s not a precise guide to Aston’s current funding costs.

What then might Aston have to pay for issuing new debt that would get wiped out before the existing bonds if things go awry for the company? A rational investor would demand a yield comfortably above 10%. This might create more cash flow problems for Aston than it solves.

Such a bond sale could, however, make sense in certain scenarios. The holders of Aston’s existing debt need the group to become durably profitable and self-funding as soon as possible. So they might want to extend more funding on terms that would make new investors balk. Indeed, Aston said in July that if it needed money it would go to familiar sources.

And the carmaker’s requirement for expensive funding might be short-lived. It may soon have hopes of generating decent cash flow on its own. Its cool DBX sports utility vehicle is due to glide off the production line in the second quarter of next year. Maybe sales will match its looks.

Yet it’s questionable whether stop-gap funding is enough to pay for the current business plan. Surely something more will have to give. A straightforward issue of new equity – say, through a rights offer, placing or introduction of a new investor – would give Aston genuine flexibility, but the company has seemed opposed to such a move.

That leaves quasi-equity, in the form of a bond that could convert into stock when the share price is higher, or accepting that the strategy as it stands simply isn't affordable and that capital spending has to fall. Either way, Aston’s reliance on the junk market can only go so far.

To contact the authors of this story: Chris Hughes at chughes89@bloomberg.netMarcus Ashworth at mashworth4@bloomberg.net