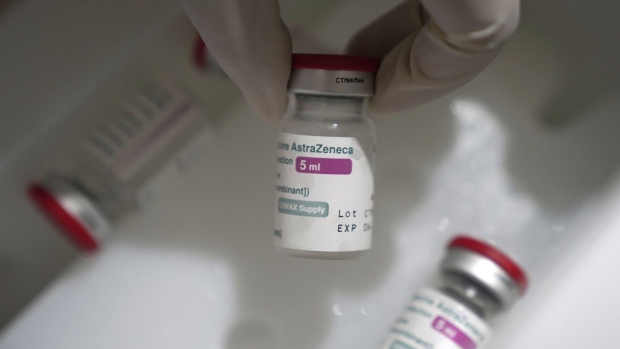 A vial of the AstraZeneca Plc Covid-19 vaccine at a vaccination drive hosed by Indonesian Retail Merchants Association in Jakarta, Indonesia, on Tuesday, May 25, 2021. An estimated 10 million workers will receive their shot through the country's privately-run vaccination campaign, with more than 22,000 companies registered for the program. Photographer: Dimas Ardian/Bloomberg , Bloomberg

(Bloomberg) -- AstraZeneca Plc’s Covid-19 vaccine doesn’t raise the risk of a rare blood clotting disorder after a second dose, suggesting people shouldn’t hesitate to get a second shot if they didn’t have trouble after the first.

The estimated rate of the disorder, called thrombosis with thrombocyopenia syndrome, was 2.3 per million in patients who received a second shot, according to data published in the medical journal The Lancet. That’s comparable to what’s found in an unvaccinated population. But the rate after a single dose was still higher, at 8.1 per million.

Astra’s Vaxzevria shot has been dogged by safety concerns after some people died after getting it, prompting some regulators in Europe to reserve the vaccine for older people. Some patients also opted to switch to another product for their second dose.

The vaccine “plays a critical role in combating the pandemic,” Mene Pangalos, Astra’s executive vice-president of biopharmaceuticals research and development, said in a statement Wednesday. “These results support the administration of the two-dose schedule of Vaxzevria” unless TTS is identified after the first dose.

The analysis was conducted using Astra’s global safety database. Reported cases of TTS occurring within 14 days of administration of the first or second dose were included up to April 30. The shot was developed with the University of Oxford and its spin-out company Vaccitech.

The results are in line with findings by the U.K.’s Medicines and Healthcare Products Regulatory Agency’s system for collecting information on safety concerns.