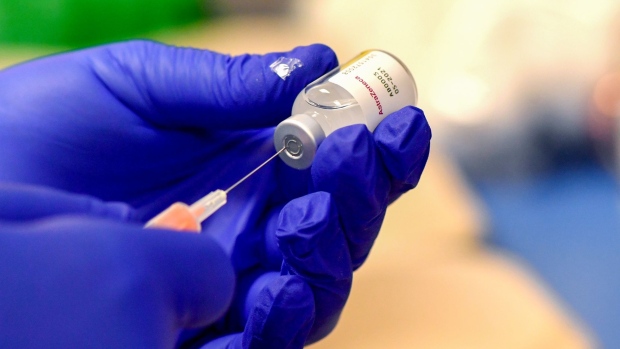 A nurse draws the AstraZeneca Plc and the University of Oxford Covid-19 vaccine into a syringe at the Royal Health & Wellbeing Centre in Oldham, U.K., on Thursday, Jan. 21, 2021. Boris Johnson's government is pinning its hopes on a mass vaccination program to reduce hospitalizations and ultimately deaths, and aims to slowly lift restrictions from March to allow the economy to re-open. Photographer: Anthony Devlin/Bloomberg , Bloomberg

AstraZeneca Plc’s Covid vaccine is equally effective against the new strain of the virus that emerged in the U.K., according to a study by its co-developer, the University of Oxford.

Protection against symptomatic infection was similar for the new variant as well as the original strain, according to the study, which analyzed swabs taken from volunteers from October through mid-January.

The results should ease concerns about the effectiveness of existing vaccines against the mutated form of the virus, which health officials have said may be more infectious than the initial one. The findings are disclosed in a preprint of the study, which has not been peer-reviewed.

BioNTech SE, developer of another coronavirus vaccine with Pfizer Inc., has also said its shot appears to maintain effectiveness against the new strain.

There are some indications that other mutated versions of the virus that have been linked to Brazil and South Africa may be more problematic for vaccines.