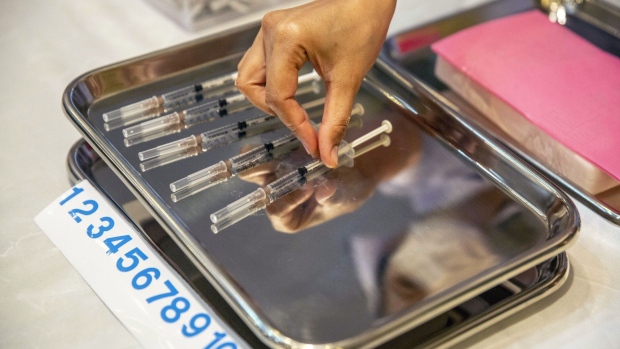 A nurse places a syringes containing doses of the AstraZeneca Covid-19 vaccine on a tray at the Bamrasnaradura Infectious Diseases Institute in Nonthaburi, Thailand. , Bloomberg

(Bloomberg) -- AstraZeneca Plc has been studying options including a potential listing of its newly-created vaccines division as it seeks ways to boost returns for investors, people with knowledge of the matter said.

The U.K. pharmaceutical giant is in the early stages of considering the best positioning for the vaccine unit, the people said, asking not to be identified because the information is private. Top management have discussed a range of possibilities with advisers including a flotation of the business, the people said.

AstraZeneca said last month it’s creating a new vaccine and immune therapies division to house its Covid-19 inoculation and antibody treatment, as well as a flu shot and drug for respiratory syncytial virus. The division, to be led by executive Iskra Reic, will include teams from AstraZeneca’s research, manufacturing and commercial departments.

Chief Executive Officer Pascal Soriot is under pressure from shareholders as AstraZeneca’s stock lags behind rivals. The company has gained 6% over the past twelve months, while Pfizer Inc. has risen 35% and Moderna Inc. has jumped 90%.

AstraZeneca said in November it would move to a profit model for the Covid-19 vaccine it created with the University of Oxford, having looked on as its competitors generated billions of dollars in sales from their immunizations.

Early in the pandemic, AstraZeneca pledged not to profit from its shot as long as the disease remained a pandemic. Soriot said it will now only seek to take a profit from wealthier nations, and will rely on tiered pricing to make sure its vaccine is affordable.

Any move involving the vaccine business could be politically fraught, and AstraZeneca will need to be careful not to be seen as profiting too quickly as coronavirus infection rates rise and governments grapple to immunize populations. Deliberations are ongoing, and the company could ultimately decide against a listing if the idea triggers too much backlash, the people said.

AstraZeneca has been taking other steps to beef up the new division. It effectively blocked Advent International’s $7.6 billion takeover of Swedish Orphan Biovitrum AB by withholding its 8% stake in the drugmaker, Bloomberg News reported Friday. AstraZeneca objected to the deal as it was seeking to buy certain assets from the Nordic company that could potentially be housed within the vaccine unit, people with knowledge of the matter said.