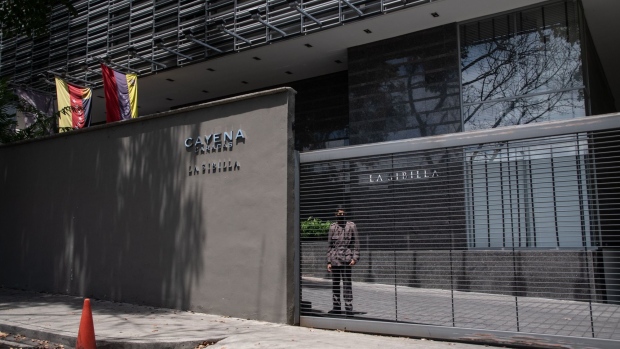 A cyclist rides past a mural of oil pump jacks on the Boulevard de Sabana Grande in Caracas. Photographer: Carlos Becerra/Bloomberg , Bloomberg

(Bloomberg) -- Inside a chic lounge, oil lobbyists and executives rub shoulders as Spanish, French and Italian can be heard in the halls. This isn’t the ZaZa boutique hotel in Houston, where global energy top brass like to stay. It’s the Cayena Hotel in the Venezuelan capital of Caracas.

Drawn by promises of privatization and more autonomy to tap the world’s biggest crude reserves, they’re meeting with the Nicolas Maduro regime and state-owned Petroleos de Venezuela SA to best position themselves when doing business there is possible again. Bigger producers like Chevron Corp., France’s Total SE and Italy’s Eni SpA would probably wait until U.S. sanctions are lifted, but smaller players might get started whenever new rules opening up the industry for private enterprise take effect.

“I want to tell investors from the U.S. and around the world that Venezuela’s doors are open for oil investment,” Maduro said in a recent televised address.

It’s a make-or-break moment for an impoverished nation that’s running out of fuel to haul food and cash to pay for imports of basic necessities. Whether Maduro will succeed in luring some investment is still unclear. But one thing is certain: Oil companies have never had such leverage with him to negotiate a piece of the country’s more than 300 billion barrels of crude.

“There is some easy potential to increase production if sanctions enforcement declines,” said Francisco Monaldi, a Venezuelan-American lecturer in energy economics at Rice University’s Baker Institute for Public Policy, and an expert on Venezuela’s oil industry. “After that, you need significant investments.”

The successor of the late Hugo Chavez, who infamously seized assets from Exxon Mobil Corp. and ConocoPhillips, is promising to pass a law that will officially end an oil monopoly in the hands of PDVSA, as the country’s ruined oil cash cow is known.

Executives representing oil companies are holding meetings to discuss what the terms would be under the new legislation, according to people with knowledge of the talks, who asked not to be named because they’re not authorized to comment on them in public.

Chevron, for one, is even getting in touch with contractors to assess how fast they could help the San Ramon, California-based company restart operations in the South American nation, one person said.

Chevron and Total didn’t return requests for comment, as didn’t Maduro’s Information Ministry, the Oil Ministry and PDVSA. Eni said none of its executives visited Caracas.

Maduro’s government says his new energy law alone will allow oil companies to get back in business as they assume control of Venezuelan assets. That’s because the U.S. only bans doing business with PDVSA, the regime and those who help it. Oil ventures run by independent oil companies, in theory, wouldn’t be barred from developing crude reserves in the country.

Major oil companies would probably wait for sanctions to be lifted regardless, but others could jump in as soon as they can claim they’re operating independently from PDVSA and Maduro’s regime, and therefore not subject to sanctions.There are people close to the government “eager to get some oil fields; I would expect there to be some privatizations,” Monaldi said. “They will try to invest in the wells that are the easiest to connect.”Wilmer Ruperti, a Venezuelan-born shipping magnate, is among less-known entrepreneurs who have sought to do business with PDVSA in the past despite sanctions. Ruperti didn’t reply to requests for comment on potential investments under the proposed new rules.

Restoring Venezuela’s oil industry back to its former glory would likely take tens of billions of dollars, and that might never happen, but any business activity would help the country.

Once a prosperous OPEC-founding member that produced more than 3 million barrels a day of crude, the nation is now pumping less than half a million.

Oil Minister Tareck El Aissami recently vowed to boost production to 1.5 million this year, and that would be difficult to achieve without help. Monaldi estimates more than $100 billion and a decade of work would be required to get output past 2 million barrels a day.

“This means you need a ton of private investment,” he said.

An increase in oil output would not only buoy the economy but also raise capital to ultimately pay off creditors holding roughly $60 billion of defaulted obligations.

So, executives from the oil industry and capital markets have also been pleading their case to officials in Washington, people familiar with those discussions said. Their message: If others are going to play ball, let’s get in on the action, too.

“The big question is if the oil companies have enough political clout for an easing in sanctions,” said Raul Gallegos, a Bogota-based director at Control Risks, an international consulting firm. “They are interested in the flexibility that Maduro is offering.”

The U.S. Treasury’s Office of Foreign Assets Control, which enforces the sanctions, didn’t immediately reply to requests for comment.

With bigger issues to tackle, from the coronavirus to tension with Russia and trade with China, U.S. President Joe Biden’s administration hasn’t yet made a significant pivot from President Donald Trump’s strategy on Venezuela. The U.S. government officially recognizes opposition leader Juan Guaido as Venezuela’s interim president until there’s a free and fair election.

If the new U.S. government at least moves to let companies resume swaps of diesel for Venezuelan crude, that would help the country avert collapse. The fuel is needed for trucks to take imported food, medicines and other products from ports to cities, as well as to haul goods from farms and factories.

Without investments in the country’s crumbling energy infrastructure, though, that would be just a stopgap solution.