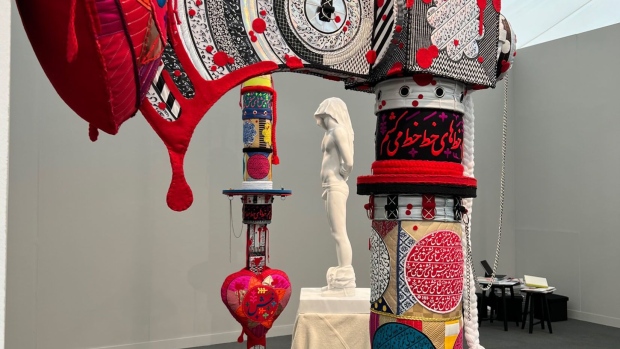 (Bloomberg) -- An hour and a half into the VIP opening of Frieze London, collector Patrizia Sandretto Re Rebaudengo sinks into a couch in the Deutsche Bank lounge. “I’ve visited the fair since its first year” in the early 2000s, says Rebaudengo, whose Turin -based art foundation is filled with more than 1,500 pieces of contemporary art. “I have never seen as many people as this year. It’s really unbelievable.”

At least anecdotally (Frieze won’t release visitor numbers until the fair has closed), the opening-day attendance was unprecedented. Never, in recent memory at any art fair in any country, were the first VIP day’s crowds so large. Aisles and booths of the fair, held in a tent in Regent’s Park through Oct. 16, are filled with an uncomfortably packed crowd of well-dressed art collectors.

Never mind the slumping pound, Europe’s looming energy crisis, the volatile stock market in the US, and fears of global recession. Rich collectors, it seems, have a cushion, at least for a while, and they are ready to get back to the business of big-time socializing. “It’s nice to be able to all be gathering again,” says Miami-based art collector Dennis Scholl, touring the booths. “We’ve all missed this so much.”

Plus, he adds, “It’s always been clear that the art market is not a leading indicator of economic distress.” Collectors, he says, are “always very late to the dance when it comes to things like recession.”

The first VIP day’s sales numbers—which were solid, albeit not spectacular—would indicate that the art world is indeed late but possibly catching up. Works are selling, dealers say, but collectors aren’t fighting each other as in years past. The frenzy, it seems, has largely been contained to the aisles of the fair rather than the booths.

Still, sales have been decent. Gagosian sold out its entire booth of paintings by Jadé Fadojutimi; the paintings’ prices weren’t officially disclosed, but are said to have cost £500,000 ($553,565) each. Pace Gallery sold a handful of works, including a $450,000 painting by Kenneth Noland, and Lehmann Maupin sold about 10 pieces, including three new pastel works by Calida Rawles, each priced from $60,000 to $70,000; the gallery says they were purchased by singer Lionel Richie.

“Any macroeconomic downturn has to last quite a while to really impact us,” says Pace’s president and Chief Executive Officer Marc Glimcher. “And this one may.” It would take, Glimcher suggests, about a year and a half of relentless bad news, at which point “people’s art buying habits actually change,” he says. In the meantime, he adds, “if you think the number of important and well-regarded artists has grown, it’s not nearly as fast as the number of collectors.”

Smaller contemporary galleries also report respectable first-day results. In the first minutes of opening, the Dastan Gallery from Tehran sold a marble sculpture by artist Reza Aramesh for about €45,000, and Berlin’s Société gallery sold a handful of pieces, including a video work by LuYang, for $85,000. “We haven’t sold everything, but we’re working on it,” says Société founder Daniel Wichelhaus. “For us, so far, nothing really has changed.”

The major preoccupations of both dealers and attendees here are the strength of the dollar in relation to the pound and the forthcoming inaugural edition of next week’s Paris+ Par Art Basel fair, which, as the name implies, is perceived by many as an attempt by Art Basel to muscle in on Frieze’s dominance of the European fall sales season.

The currency differential hasn’t moved the needle, at least initially. Works tend to be priced in whatever currency an artist works in: A British artist’s price is in pounds while a French artist’s work comes in euros. Given the strength of the dollar, Americans were obviously enjoying themselves, but European collectors appeared unconcerned.

“For me, what’s always important is to buy what I love,” says Rebaudengo. “The pound was always so strong, the dollar was weaker, and you would ask the gallery: ‘Is it in pounds, euros, or dollars?’ Now we don’t ask, because it’s all the same.”

The looming competition from Paris, though, feels more like a real threat.

“I don’t know if people will come here and then go there, or if they're going to miss London completely,” says Francesco Dama, a dealer at Rome’s Galleria Lorcan O’Neill, speaking in the first minutes of the fair’s opening. “I don't expect that, but will they keep themselves from buying things here—and then buy there?”

Even though many galleries will show at both fairs, there might be a perception that they’re saving their better work for the more novel edition. This year, Dama continues, “will be kind of like an experiment.”

Frieze Masters tends to feature older artwork (medieval illuminated manuscripts, Renaissance oil paintings, Surrealist drawings) and is housed in a separate tent in Regent’s Park, about a 15-minute walk from Frieze London. There, the crowds were smaller and the prices higher.

Standing outside his booth, which features a painting by Alberto Giacometti priced at $5.8 million and a work by Philip Guston that will later sell for $4.8 million, Hauser and Wirth President Marc Payot says he perceives fewer American collectors in attendance. “I think more Americans are going to Paris,” he says. “You can’t be away for two weeks, so they have to pick. And Paris is strong competition.”

Still, not all collectors are from the US. After 10 minutes of chit-chatting in the lounge, Rebaudengo is ready to go. “I have just arrived, and I’ll start to look now,” she says. “But I will buy, absolutely.”