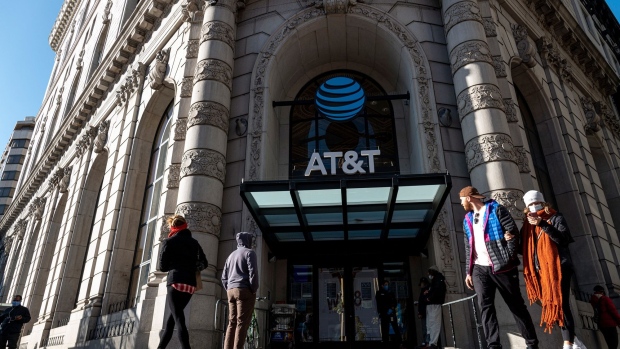 AT&T Inc. signage is displayed on a store in San Francisco, California, U.S., on Tuesday, July 21, 2020. AT&T is expected to release earnings figures on July 23. , Bloomberg

(Bloomberg) -- AT&T Inc. and three of its employees asked a judge to throw out a lawsuit by a federal regulator claiming they selectively disclosed nonpublic information about the company’s finances to certain analysts.

At a hearing in Manhattan on Wednesday, they said the data was already public and that investors wouldn’t have considered the revelations important enough to influence their decisions anyway.

In the suit, filed in March 2021, the US Securities and Exchange Commission accuses the company and employees of disclosing confidential information to more than a dozen analysts during calls in March 2016. The SEC says they did so after learning that first-quarter revenue would be lower than analyst estimates because of a larger-than-expected decline in smartphone sales.

Read More: AT&T Is Sued by SEC Over Information Disclosed to Analysts

Those disclosures, the SEC claims, violated Regulation FD, which bars companies from giving “material nonpublic information” in private meetings without simultaneously disclosing it to all shareholders. The case is a rare claim that a company violated Reg FD, which was adopted in 2000, long before the rise of social media.

The hearing was over dueling requests for summary judgment, as each party tried to persuade US District Judge Paul Engelmayer to come down on its side without a trial.

At one point, the judge had sharp words for the SEC, pressing it on why it hadn’t gone after more-senior executives, such as the company’s then chief financial officer.

“For heaven’s sake, why are you not charging the upper-level people?” Engelmayer pressed the regulator. “You are giving the lower-level people a defense.”

Earlier, lawyers for the telecommunications company told Engelmayer that information about a slowdown in smartphone upgrades had already been publicly disclosed. They said John Stephens, then CFO, had revealed it during a presentation at a Deutsche Bank conference earlier that March, before the calls.

Krumholz also argued that the information that AT&T expected revenue from equipment to drop 15% to 20% from a year earlier was part of a trend. He said it had no effect on the company’s stock price and therefore no impact on investors’ decisions to buy, sell or hold the shares.

The decline had less than a 5% impact on total revenue, a general threshold for whether a misstatement is considered material to investors, and the market had discounted a $600 million revenue miss the previous quarter, he said.

The SEC countered that the company’s aim was to stop the share price from moving. The agency alleges the object of the phone calls was to get enough analysts to revise their revenue estimates downward so their consensus projections would fall to the level AT&T would report publicly, allowing it to avoid a third quarterly miss on the metric.

“Their goal was not to have any stock price movement,” said Alexander Vasilescu, an attorney for the SEC. “It doesn’t make sense to look at whether the market reacted after each analyst put out their report. They were afraid of the market information. When they miss revenue consensus, the market reacts.”

‘Walking the Street Down’

The SEC modified its view of permissible venues for disclosure in a 2013 decision not to act against Netflix Inc.’s Reed Hastings, who wrote in a Facebook post that views on his company’s service had exceeded a billion hours for the first time.

As for the AT&T calls, Vasilescu said, “this type of walking the Street down is one of the main reasons Regulation FD was implemented.”

The judge asked the SEC why it hadn’t sued Stephens or the head of investor relations, given its allegations that the CFO told the IR department to “work the analysts who still have equipment revenue too high.” A lawyer for the SEC told the judge he wasn’t authorized to comment on the reason.

The judge declined to rule on the summary judgment motions following Wednesday’s arguments. He urged the two sides to come to a resolution.