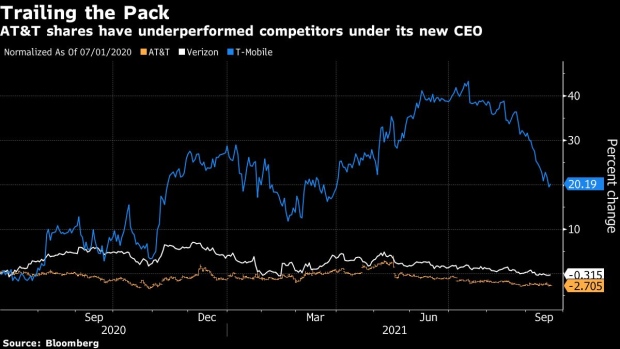 (Bloomberg) -- AT&T Inc. Chief Executive Officer John Stankey isn’t exactly blaming his predecessor Randall Stephenson for the company’s failed media strategy, but he is taking credit for trying to put the phone giant back on track.

After taking the top job last year, it became clear from talking to investors that “one of the things I think we need to do is basically formulate a different investment thesis,” Stankey said in a webcast presentation during the Goldman Sachs Communacopia conference.

“Anytime there’s a leadership transition at the top of the food chain, often times it’s a good time to step back and take stock of where the business stands,” Stankey said.

Stankey has spent the past year dismantling the $100 billion media colossus that Stephenson built by acquiring DirecTV and Time Warner Inc. to compete against Walt Disney Co. and Netflix. The ambition to merge the largest U.S. network operator with a giant media production business that included HBO and Warner Bros. eventually turned into what business historians may one day call a bit of an overreach by a phone company.

“I’m not hiding anything to say there was a little bit of a redirection that occurred over the last year and a refocusing of where the business needed to be,” Stankey said.

Investors are waiting to reap the rewards of Stankey’s efforts. The return on AT&T shares since he took over more than a year ago has trailed those of both of its main competitors, Verizon Communications Inc. and T-Mobile US Inc. The stock has declined about 5.5% so far this year.

Once the spinoff of WarnerMedia into a joint venture with Discovery Inc. is complete by mid 2022, AT&T will have returned to its primary network focus, with a priority on expanding 5G wireless and fiber broadband services.