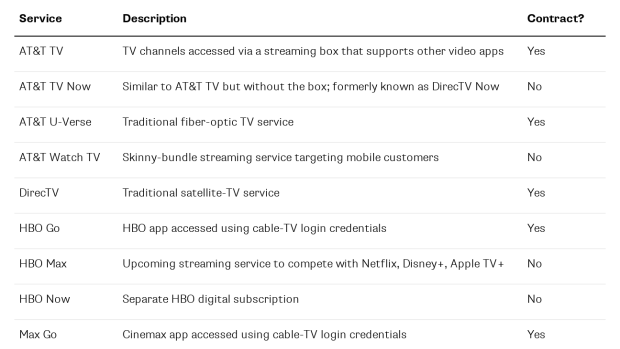 That was one of the main messages in a letter Monday morning to AT&T Inc.’s board from Jesse Cohn, the head of U.S. activist investing at Elliott Management Corp. who is pressuring the communications and media conglomerate to get its act together. AT&T’s share price and reputation have been dragged down by troubles stemming from its ill-advised takeover of DirecTV in 2015 and its subsequent megadeal last year for Time Warner, which has yet to bear fruit. AT&T’s core wireless business continues to perform well, but it’s being overshadowed by CEO Randall Stephenson’s perplexing decision to expand into areas beyond his and the company’s expertise. And it’s making this push at a time when others from Rupert Murdoch’s Fox Corp. to Verizon Communications Inc. are looking to exit media and pay-TV assets or otherwise streamline their businesses.

Elliott disclosed that it owns $3.2 billion of AT&T stock and wants the company to consider a number of changes. They include ridding itself of distractions such as the DirecTV unit and wireless operations in Mexico; eliminating wasteful spending; empowering the board to hold Stephenson’s team more accountable; and avoiding any more big M&A. This way, AT&T can sharpen its focus on 5G, the next generation of wireless networks – in which it has a chance to outshine Verizon – and come up with a clearer strategy for streaming-TV products, where it faces fierce competition from Netflix Inc., Walt Disney Co. and others. As of now, AT&T offers all of the following video services, and I wouldn’t be surprised if its own managers failed a pop quiz on which one does what:

Cohn’s letter, co-signed by Marc Steinberg, an associate portfolio manager at Elliott, is a reiteration of the columns I’ve written during the past two years, so I agree with many of their points. Activist shareholders are often guilty of stating the obvious and making overly broad recommendations for things a company should already be doing anyway. But this is a case where AT&T has started to look unwieldy and is moving too slowly to address that. It’s time an investor spoke up.

To Stephenson’s credit, he has been making headway in paying down debt this year, by raising prices for DirecTV’s satellite and streaming packages and selling off WarnerMedia’s (formerly Time Warner) Hudson Yards office space in New York and its  stake in Hulu. Still, AT&T was saddled with $186 billion of debt, net of cash, as of June. That’s more than fellow media giants Disney and Comcast Corp. owe combined.

After AT&T’s share price popped almost 5% on Monday morning, the company acknowledged the letter and said Stephenson and his team “look forward to engaging with Elliott.” It’s always my favorite choice of words by companies suddenly targeted by an activist investor, because you know the last thing they are thinking is that they’re looking forward to dealing with one. AT&T also said that it’s already taking many of the actions Elliott proposed. If that’s true AT&T sure hasn’t done a great job of articulating that.

There are so many strategic decisions I could pick apart (and have), but I think this one is emblematic of the company’s situation: Last year, AT&T decided that driving away DirecTV and DirecTV Now (now called AT&T TV Now) customers by raising prices and cutting back on channels was the best path to improving profitability. When making a product less appealing to customers is the strategy, that’s a problem. It doesn’t serve consumers, employees or shareholders to operate that way, which is why I’ve written here and here that AT&T should sell off the DirecTV division – especially as AT&T’s own WarnerMedia group gears up to introduce HBO Max next year, an app that will compete with DirecTV services.

AT&T is valued at nearly 8 times forward Ebitda, a 20% premium to its five-year historical average ratio, though it’s a wide discount to Disney and Comcast’s valuations. Cohn and Steinberg figure their suggestions could drive AT&T above $60 a share by the end of 2021, from about $38 currently. I don’t put much stock in such predictions, though it’s clearly caught shareholders’ attention.