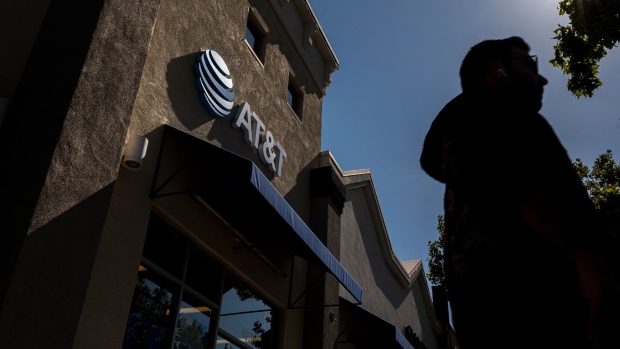 (Bloomberg) -- AT&T Inc. committed nearly $9.1 billion for new airwave licenses as the top bidder in a government auction that fetched a total of $22.5 billion, marking another leg in a race by U.S. wireless carriers to build advanced 5G networks.

As the third-largest U.S. wireless carrier both in subscribers and in midband spectrum holdings, AT&T used the auction to close the gap with its rivals. The company is reorienting itself toward 5G services and fiber-delivered broadband, and unloading the $100 billion in TV and media businesses it acquired under previous management.

With the second-highest bid, Dish Network Corp. will pay $7.3 billion, according to the Federal Communications Commission, which ran the auction. Other bidders included T-Mobile US Inc. with a $2.9 billion commitment.

Total bids were expected to reach the $25 billion range, based on a Bloomberg survey of analysts. Bidding began in October for the block of airwaves in the 3.45-to-3.55 gigahertz range. The auction follows a record $81 billion federal spectrum sale early last year for C-band frequencies.

The midband airwaves have the capacity to carry massive amounts of data at blazing speeds, making them especially valuable to wireless carriers. The companies plan to generate new revenue by using 5G to deliver home broadband, or mobile connections to semiautonomous vehicles or cloud computing services to big companies.

T-Mobile has a huge head start in 5G, having acquired midband licenses as part of its Sprint Corp. takeover last year. Verizon Communications Inc. spent a record $45 billion on airwaves in the C-band auction, and plans to launch its network in nearly all of the nation’s top 50 markets later this month.