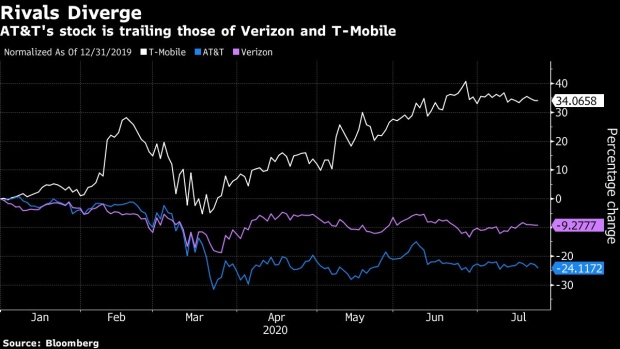 (Bloomberg) -- AT&T Inc. said 338,000 regular mobile-phone subscribers stopped paying for their service due to the Covid-19 crisis, which is the first time a U.S. mobile-phone company has disclosed how many people are skipping bills under financial duress from the pandemic.

The company said an additional 159,000 broadband customers and 91,000 TV subscribers have also stopped payments due to Covid-19 in the second quarter. AT&T and other carriers have vowed not to shut off service to people affected by the viral crisis.

The nonpaying customers and subscriber declines, which also continued in AT&T’s wireless and DirecTV video service, applied further pressure to the company’s cash position as it tries to maintain a generous dividend.

Due to the uncertainty surrounding Covid-19, AT&T could only provide limited guidance, saying that the dividend-to-free-cash-flow ratio would be at the low end of the 60s percentage range it had previously targeted. And capital spending for the year will be about $20 billion, compared with $19.6 billion in 2019.

The company pays about $14 billion to $15 billion in dividends annually. Last year, AT&T’s dividend-to-free-cash-flow ratio was 51.3%. The lower the percentage, the more cash the company has at its disposal for other uses.

AT&T lost 886,000 TV customers and 154,000 regular monthly wireless subscribers, including phone, watch and tablet users. That was better than analysts’ predictions for a loss of 939,000 TV subscribers and 210,000 wireless defections.

The Dallas-based communications and media giant posted adjusted earnings of 83 cents a share on $40.95 billion in quarterly revenue, topping estimates for earnings of 79 cents on $40.94 billion in sales. The effects of the coronavirus pandemic cut about 9 cents from the company’s adjusted EPS and reduced revenue by $2.8 billion, the company said.

For more on AT&T’s earnings, click here for our TOPLive blog.

(Updates with broadband and TV customers not paying and company comment starting in the second paragraph.)