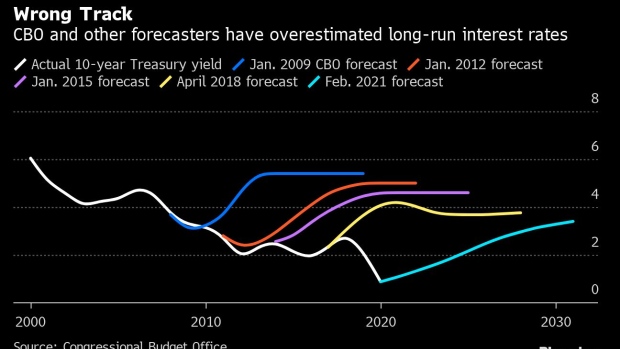 (Bloomberg) -- Stripped down to basics, the new consensus in economics goes like this: It’s fine for governments to borrow and spend more money -- so long as they can get hold of it cheaply.But as a guide to policy, the doctrine has a blind spot. Because even after arguing the point for a couple of centuries, economists find it hard to pin down what drives long-run interest rates -- or predict where they’re headed.

“The greatest area of uncertainty in any forecast is really the forecast of interest rates,” Laura Tyson, a senior economic adviser to the Clinton and Obama administrations, told Bloomberg TV . “The profession has not been great at timing either the direction or the amount.”

Those are crucial questions right now, for governments trying to figure out how much it’s safe to spend on pandemic recovery, and for investors wondering if this year’s surge in sovereign-bond yields is a blip or the start of a new era.

For years, estimates of future borrowing costs have tended to be too high –- leading to projections of bigger debts, and helping deter public spending. Some worry the opposite could happen now: politicians will grow complacent about low interest rates, borrow and spend too much, then get a nasty surprise when they spike.But there’s a school of economic thought says that governments and central banks play a bigger role in shaping interest rates than the mainstream acknowledges. Translated into practical terms, that means countries can turn their own borrowing costs into a policy choice, instead of a price that gets discovered in the marketplace.

It’s not a new idea, says Paul McCulley, the former chief economist at Pimco. “The central bank has always had more power over long rates than the consensus had thought,” he says. “They just weren’t exercising it.”Now, they are -– one way and another.The Bank of Japan has been explicitly targeting government borrowing costs for years, under a policy known as yield-curve control. Australia followed suit during the pandemic.But central bankers, often the main buyers of sovereign debt nowadays, have other ways to steer the yields without officially making them a policy tool. European Central Bank officials, for example, acknowledge off the record that they manage the cost of borrowing for euro-area governments via bond purchases.

The Federal Reserve, which is buying about $80 billion of Treasuries every month, practiced overt yield-curve control during World War II. In the past year, Fed officials have referenced the policy without suggesting it’ll be implemented anytime soon.

Sometimes the idea on its own is enough, says McCulley, who now teaches at Georgetown University. Once central banks acknowledge they have that power, “and the market agrees with that, then it becomes a self-fulfilling prophecy.”The concern about such policies has been that politicians will spend their countries into bankruptcy or hyperinflation without some kind of external discipline.

Once, financial markets were thought to provide it. More recently the task has been assigned to central banks, which were supposed to be walled off from the rest of government so they can focus on nipping any signs of inflation in the bud.Key parts of that intellectual edifice have crumbled, especially since the financial crisis. Bigger budget deficits and debts, one of the things that were supposed to push interest rates higher, didn’t do so.

Politicians pivoted to austerity anyway, without much of a push from the markets -- and economies suffered a lackluster recovery as a result.

Covid-19 brought a different approach. Spending by governments has been the key to recovery -- and the frameworks for assessing how far they could safely go didn’t seem much use.

Typically based around budget deficits or national debts as a share of the economy, traditional fiscal guidelines didn’t have a role for interest rates. They made no provision for the way debts have become cheaper to service even as they grew bigger -- because of the plunge in borrowing costs. Even the Euro area, which enforces a strict version of the old-school rulebook, threw it out in the pandemic.Economists are working on new rules for a low-rates era.

In a November paper, Jason Furman and Larry Summers -– Harvard economists and senior officials in the Obama administration -- argued that the interest payments a government has to make every year are a better benchmark than its total debt or annual deficit.

The idea carries weight in the Biden administration. Treasury Secretary Janet Yellen says she agrees with it.

Furman says that the rule of thumb advocated in his paper –- keeping real debt-service costs below 2% of GDP –- is applicable regardless of who’s right in the debate about what drives interest rates. He says there’s not much to be gained from using monetary policy to impose a cap on government borrowing costs.“Can central banks decide one variable? Yes. Can they simultaneously decide three variables? No,” he says. “You can do financial repression for a while,” but that just makes it harder to meet other targets like keeping inflation under control.

Modern Monetary Theory, an emerging school of economics, agrees that inflation is the ultimate yardstick for policy. But it has different ideas about how governments pay for their spending -- and what determines long-term interest rates.While Furman and Summers favor explanations such as ageing populations, rising inequality and capital-saving technology, the MMTers follow a line of thought that has roots in the work of John Maynard Keynes. It emphasizes the role of monetary policy. The long run is just lots of short runs piled together, the reasoning goes. So when central banks persist in keeping short-term borrowing costs low, they shape long rates too.After decades on the fringes, MMT economists see the debate shifting in their favor. Some of their positions are now widely held: Countries that borrow in their own currencies can’t go broke, and the real risk of overspending is inflation not bankruptcy.The MMTers would like the profession to take another step in their direction by acknowledging that governments can manage their own borrowing costs.

In the mainstream models, even when governments are paying low interest rates and have room to spend, “there’s always this danger” that debt costs could spike and derail their plans, says Scott Fullwiler, an MMT economist and professor at the University of Missouri-Kansas City. “They haven’t put into this framework that the interest rates are a policy variable.”