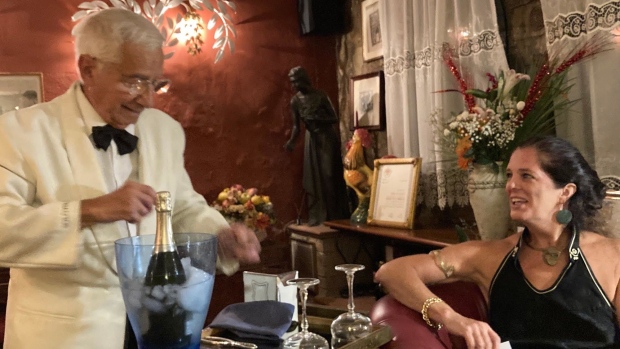 The single table for two at Solo per Due near Rome. , Photographer: Andrew Davis/Bloomberg

(Bloomberg) -- Is it possible to uncover a singular dining experience in the vicinity of Rome that feels like a secret? Something that hasn’t blown up, thanks to Stanley Tucci’s Searching for Italy or the late Anthony Bourdain’s wanderings? It is possible. That place is Solo per Due, which boasts just one table for two and bills itself as the world’s smallest restaurant.

Tucked in the verdant, uncrowded Sabine hills about 70 kilometers (40 miles) from central Rome, Solo per Due has been a place for romantic dinners for more than 30 years, says founder Remo Di Claudio. The experience is as much about earning Brownie points from your date as it is about the food.

This kind of exclusivity isn’t cheap. A four-course meal for two with wine and dessert will set you back €500 ($495). That’s about the price of the seven-course tasting menu at the three-Michelin-starred restaurant La Pergola in Rome, where the ambitious plates might include grilled cuttlefish enhanced with smoked vinegar gel.

The menu at Solo per Due is much more casual. It’s also highly curated, arranged a week in advance with Di Claudio based on the diners’ tastes and the availability of seasonal meats and produce. We determined that our four-course meal would be seafood-focused, because my wife, Helen Bannigan, is pescatarian, but Di Claudio will cater the menu to carnivores or make it fully vegetarian. Dishes run from asparagus risotto and eggplant parmigiana to filet of Chianina, the excellent beef from central Italy.

The evening’s soundtrack can also be customized, and special touches can be arranged, such as a professional fireworks show, for an additional fee starting at €700.

The meal is served in a sitting room of a 19th century villa located in Upper Sabina, in an area carpeted with olive trees that produce some of Italy’s finest oil.  The 400-square-foot room is replete with busts of emperors, candelabras, floral displays, and prints of bucolic country scenes. It’s a cross between ancient Rome and a Downton Abbey episode.

As our August reservation approached, Di Claudio suggested a 9 p.m. start, late, even by Italian standards. “For the lights,” he said.

The entrance is certainly dramatic. Roman busts illuminated by candle flames flanked the entry patio; the pathway behind it was lit by brightly glowing torches leading through a garden of palm trees and cypresses.

The miniature dining room is in the back, near the ruins of a villa of the Roman poet Horace. It’s decorated with big, red leather chairs in front of a fireplace. Evenings at Solo per Due begin there, with a bottle of prosecco on ice.

When you’re settled, Di Claudio, dapper in a white tuxedo, will appear. He’ll  have a bouquet of flowers in hand: Helen got local sunflowers along with a personalized note he and I arranged in advance. It’s a strong start for a date night.

There are no hovering waiters at Solo per Due, only a silver bell. Ring it, and Di Claudio will materialize.  Meals take place at the nearby dining table, lit by large, silver candelabras and abundantly decorated with flowers (on our night, roses and daisies).

Di Claudio doubles as one of the chefs, keeping the Solo per Due team lean. Generally there are two to three waiters who also share in the cooking. On the night I dined, one of them was on holiday, and Di Claudio recruited his son, Giovanni, who cut short his vacation to help out.

Meals might start, as ours did, with a plate of three enormous, nicely grilled gamberone, or giant prawns, with a delicately seasoned breadcrumb filling to complement the seafood’s sweetness.

More courses might include pasta with lobster, featuring a mound of al dente tagliolini, studded with chunks of tender, creamy seafood.  You might be full by the time the last savory course arrives—for us, a skewer of squid and shrimp, grilled in oil with a generous sprinkling of salt. But you’ll keep going because the dishes are so fresh flavored and appealing.

At this unconventional restaurant, there’s no wine list. Instead, Di Claudio will present a series of bottles for diners to pick from. We had the choice of five chilled whites to go with our pescatarian menu. We selected a fruity and dry Umbrian white from Arnaldo-Caprai, better known as a leading producer of the great Umbrian red Montefalco Sagrantino.

Desserts are invariably served on a bed of roses. Our pistachio mouse cake was heart-shaped, our names written in icing. We had our after-dinner drinks, with an assortment of fruit, including peeled figs, grapes, and strawberries, back at the fireplace,.

At a time when a lot of restaurants in the UK and the US are setting time limits on seatings, a meal here is especially relaxing. Dinners at Solo per Due often run more than three hours.

Di Claudio says he founded Solo per Due for couples who were stuck in dining room Siberia at restaurants that prioritize larger, more profitable tables. In fact, Solo per Due has been the scene of dozens of marriage proposals—and also what the owner calls Last Suppers, a final meal before a divorce is finalized.

If the whole setup seems contrived and over-the-top, well it is. In much the way sending a dozen, long-stemmed red roses on Valentine’s Day. It may be clichéd, but that doesn’t stop the experience from being lovely.

Long, leisurely meals come with unexpected challenges, though. Playlists can run out of steam: Our classical one morphed into piano Muzak, with Don’t Cry for Me Argentina segueing into the Theme From Love Story.

Another issue of dining at Solo per Due is logistical. The location is remote—most of the nearby hotels are miles away, over dark and winding roads that snake through the Sabine Hills. (Di Claudio recommends La Torretta in the medieval hilltop town of Casperia, a seven-room bed-and-breakfast in a restored 15th century palazzetto; double rooms with breakfast start at €100.)  Solo per Due can also arrange a driver for the hour-long trip from Rome or to and from nearby towns.

Solo per Due is open for lunch and dinner. It’s old-school; reservations, which should be made well in advance, can be done only by phone. And if you’re on a first date and thinking about impressing your partner by breaking out your Black Amex, forget about it. Solo per Due doesn’t take credit cards.