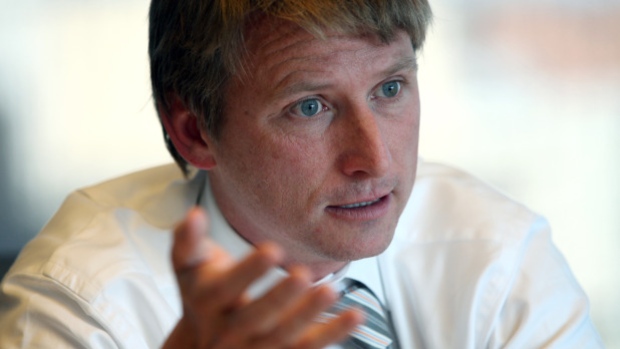 (Bloomberg) -- New allegations of questionable behavior by Athenahealth Inc. Chief Executive Officer Jonathan Bush are emerging as the health technology executive attempts to fend off a takeover proposal from an activist investor.

In the past week, Bush has apologized for assaulting his ex-wife, and public records have surfaced alleging that he subjected a female employee to what she described as a “sexually hostile environment.”

A 2017 video clip seen by Bloomberg of Bush at a health-care industry event features the CEO dressed up as a race car driver, pretending to be the title character from the 2006 comedy “Talladega Nights: The Ballad of Ricky Bobby,” and at times reading from a cue card.

Midway through the skit, he says he wants to “jump down on’’ one of his female employees “and do inappropriate things.” He then briefly pauses. “Uh, but obviously that’s totally inappropriate and would never happen or be said on a microphone.” The exact context of the remarks isn’t clear.

The company is facing a takeover attempt by the hedge fund Elliott Management Corp., which has cited Athenahealth’s poor management as one reason for its underperformance. The company, which makes an online platform doctors use to manage their practices, so far hasn’t bowed to Elliott’s proposal to buy it for $160 a share.

Athenahealth’s annual meeting of shareholders is scheduled for Wednesday, and the allegations from Bush’s past may present a challenge for the 49-year-old CEO, co-founder of the company and nephew of former President George H.W. Bush.

Bloomberg also obtained a 2007 complaint filed by a female Athenahealth employee with the Massachusetts Commission Against Discrimination, a state body that investigates discrimination complaints.

The woman, who according to the complaint worked as a manager for Athenahealth, alleged that she was wrongly terminated and was told she was “destructive to the team,” despite being given positive performance reviews. In the complaint, she said Bush “engaged in highly inappropriate conduct regarding a female employee at an awards banquet in or around early 2005.”

Attempts to reach the woman who filed the complaint were unsuccessful, and the complaint was withdrawn with a note saying that the woman intended to refile it in civil court. It wasn’t immediately clear if she did so.

In a statement responding to video and the 2007 allegation, the company said that “the Athenahealth board takes these matters seriously and is committed to taking appropriate steps to serve the best interests of the company and its stakeholders.”

The company declined to make Bush available for an interview or provide a comment from him, and a voicemail left for him on a cellphone was unreturned.

In interviews, multiple current and former employees at Athenahealth, all on the condition of anonymity, painted a complex picture of Bush, some calling him fun to be around, others saying his actions weren’t always appropriate, in their view, for a CEO of an about $6 billion public company.

Bush also faced a complaint in 2009, by another woman who said she was mistreated and left the company in part because of the “sexually hostile environment which I was forced to work in.”

The former employee alleged in a complaint to the Massachusetts commission that Bush had stared at her breasts, made sexual remarks and talked openly about his sex life in a way that made her uncomfortable. The complaint was first reported by the New York Post.

The 2009 case was settled, and the employee, who spoke to Bloomberg on the condition of anonymity, called Bush a good person and leader, and said she regretted filing the complaint.

Athenahealth said its decision to settle a claim doesn’t necessarily speak to its credibility or merit. The company also pointed to its updated harassment and discrimination policies, its women’s leadership forum and efforts to promote diversity.

The past allegations against Bush come amid a cascade of women alleging sexual harassment, assault and inappropriate behavior by powerful men. Bush’s brother, the entertainment figure Billy Bush, left NBC in October 2016 after he appeared in the leaked 2005 “Access Hollywood” video of President Donald Trump making lewd comments about women.

Bush has also faced allegations of physical abuse of his former spouse.

In court records from a 2006 custody battle in Massachusetts, his ex-wife Sarah Seldon alleged that Bush punched her in the sternum, and pushed her on other occasions more than a decade ago.

The assault occurred at their home “while she was holding their one-year-old son in her arms," according to the court documents.

Athenahealth said it wasn’t aware of the domestic-violence allegations until May 25, when it was approached by the U.K.’s Daily Mail, which first reported the allegations. Bush issued an apology for his actions, saying he had taken “complete responsibility for all these regrettable incidents involving my dear former wife.”

Seldon issued a separate statement saying the “incident did happen, and is part of his and our family history, however it should not define Jonathan as a person, or our relationship overall.” Bush emphasized that the attack had occurred 14 years ago “during a particularly difficult personal time in my life when I was going through a divorce.”

After the abuse reports, Athenahealth said Bush has “made amends with his ex-wife and has shown deep remorse."

So far, Elliott Management, the activist investor targeting the company, has declined to comment on any of the allegations. It has previously called the company poorly managed and said Athenahealth should accept its May 7 buyout proposal.

Since Elliott’s proposal became public, Athenahealth’s shares are up 18 percent. They closed Friday at $149.30.

Since its original proposal, the hedge fund has sent two follow-up letters to Athenahealth’s board, chiding the company for refusing to engage and saying that shareholders were eager to see the company explore a sale. Two top holders -- ClearBridge Investments and Janus Henderson -- have also urged the company to consider a sale.

Elliott says it controls 8.9 percent of the company’s shares. In the hedge fund’s initial proposal, it said it recognized the “unique and powerful accomplishments that have taken place at Athenahealth” under Bush.

Even so, Jesse Cohn, a partner and senior portfolio manager at Elliott, said in the May 7 letter that “it is clear to us and becoming clear to many others that Athenahealth’s potential will never be realized without the kind of operational change that the company seems unable to deliver.”

On the day Elliott’s proposal was made public, Bush sold some of his holdings under the provisions of a trading plan he put in place in October, according to a regulatory filing. The filing shows Bush sold 25,000 shares at $155 a piece, for total proceeds of almost $3.9 million.

Athenahealth started as a medical practice and birthing center in California called Athena Women’s Health and the Birthplace, according to the company’s website.

Bush also served as the chairman of the company’s board of directors until February of this year. That position has since been filled by Jeffrey Immelt, who previously served as CEO and chairman of General Electric Co. The company is also searching for a president, a role Bush currently fills.

(Updates with shares in 26th paragraph.)

--With assistance from Christie Smythe.