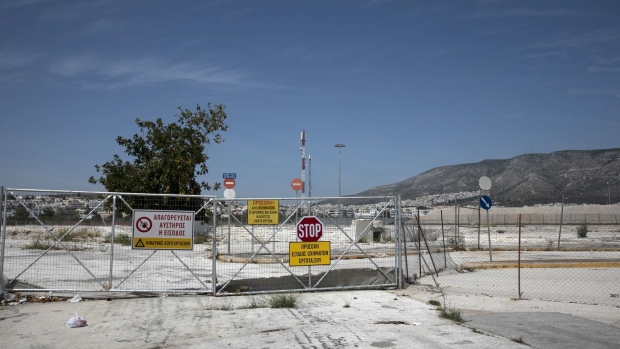 Tram lines at Hellinikon suburb, south of Athens, Greece, on May 5. , Bloomberg

(Bloomberg) -- The redevelopment of Athens’ old airport offered a unique chance to secure pristine sea-side homes close to a major city, and even before bulldozers start to roll, it may already be too late to buy one.

Demand has been so strong that all of the apartments in the project’s 45-floor marina tower as well as the 27 beach-front villas available will be sold by the beginning of next year, if not earlier, according to Odisseas Athanasiou, chief executive officer of Lamda Development SA, the project’s developer.

The company has already secured more than 700 million euros ($820 million) in deposits with prices starting at 9,000 euros per square meter. Rates are expected to reach 14,000 euros by 2025, which would be the highest in Greece and comparable to the likes of New York, Shanghai and Geneva.

“It’s huge, because we’re talking about a value close to 1 billion euros” once the property is delivered, Athanasiou said in an interview.

The early sales are a good sign for Greece’s biggest development project. Stretching across an area three times the size of Monaco, the redevelopment of the decommissioned Hellinikon airport could add as much as 2.2% to the country’s economy and 80,000 jobs by 2025.

The project -- now officially known as The Ellinikon -- is a much-needed boost for Greece, which saw output contract by around one-fourth during the decade-long debt crisis. The pandemic then caused an 8.2% decline last year.

The redevelopment has been a long-time coming. The airport was shut down in 2001, and the land -- which was sold to Lamda in 2014 -- has been vacant ever since. On top of political bickering, the project was sidelined by the fallout from the debt crisis.

“The multiplier effect from an investment standpoint, from a tourism standpoint and the perception for the country is going to be huge,” Athanasiou said.

The project is designed as an example of what modern Greece can be. The area will be powered by renewable resources, and sensors will regulate everything from lighting to garbage pick up. The Ellinikon will be one of the world’s first smart, green communities built from scratch, according to Athanasiou.

The project is also critical for Lamda, a real-estate developer hit by the pandemic. Two of the company’s three malls just recently managed to reach 2019 levels with the latest easing of lockdown restrictions.

Lamda plans an initial public offering for its mall unit in 2022. The transaction is expected to generate liquidity of more than 400 million euros, Athanasiou said, adding that the company plans to gradually reduce its holding in the malls to less than 45% from 88% now.

Two new shopping centers are planned as part of the airport redevelopment, and those could also be sold to the mall unit, Athanasiou said.

Bolstered by the project, Lamda aims to triple its value by 2025, according to the CEO. The shares have risen 12% this year, valuing the company at 1.4 billion euros.

A 1 billion-euro business park will also be constructed in the area, and Piraeus Bank announced last week it will move its headquarters to the Ellinikon. Other big companies are expected to follow.

“Greece will become a world-class destination,” Athanasiou said. “Moving from just a sea and a sun destination to an art of living one.”