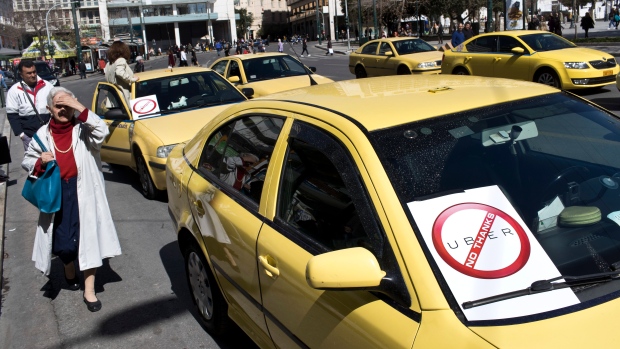 ATHENS - Hundreds of taxi drivers marched in central Athens on Tuesday to protest at what they called an "invasion" by Uber, and attacked passing cars they thought were being used by the ride-hailing service.

The drivers say the services are taking their business. They have also accused the Greek government of holding up legislation to regulate booking apps such as Uber and the locally-developed app Beat.

"We will not co-exist with them," said Yorgos Souitsmes, one of the protesting drivers. "It's a multinational that wants to steal the bread of Greeks."

Uber did not immediately respond to a request for comment.

Banners held up by protesters read "Uber No Thanks." Crowds kicked and punched or hurled coffee at at least three passing cars they said were driven by Uber drivers.

SATA, a regional union representing taxi drivers, called a nine-hour strike on Tuesday against "every innovative platform robbing taxi drivers and our country".

"For three years now we've been fighting a big and daily battle to counter Uber's ... arbitrary invasion of public transport," it said in a statement.

Uber has faced regulatory and legal setbacks around the world prompted by opposition from traditional taxi services and disputes over labor rights. It has been forced to quit several countries, including Denmark and Hungary.

The Transport Ministry has not released details on the legislation but media reports suggested it plans to force app operators to sign three-year contracts with licensed taxi drivers and subject them to strict rules.

News of the plan last year angered commuters worried it would disrupt a popular service. Tens of thousands signed a petition launched by Beat in favour of ride-hailing services.

Beat, which was bought by German carmaker Daimler last year, has more than 1 million customers in Greece. Uber is not as widely used in Greece.