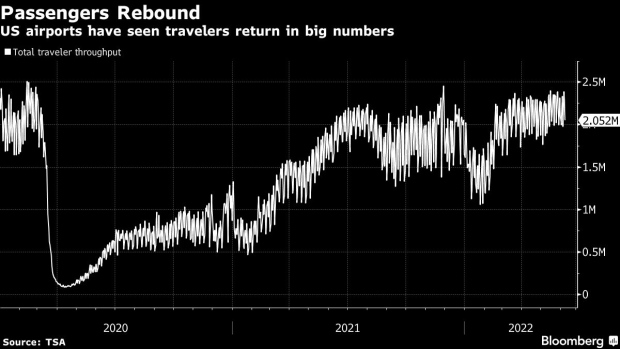 (Bloomberg) -- Atlanta plans to sell more than $535 million to finance upgrades at the world’s busiest airport, and may benefit from a somewhat slow week of issuance and an uptick in demand for munis.

Proceeds of the deal, scheduled to price Wednesday, will support projects that include a new taxiway, terminal modernization and an expanded security checkpoint, as well as a range of other infrastructure improvements at the Hartsfield-Jackson Atlanta International Airport.

The muni market faced a bruising start to 2022, but Atlanta appears to have timed its deal with a surge in demand during a slow week. Airport traffic around the US has nearly recovered to 2019 levels since the coronavirus pandemic all but shut down the industry. In May, airport bonds returned 1.7%, marking the first positive returns of the year, according to the ICE BofA US Airport Municipal Securities Index.

“Atlanta is benefiting as much from market dynamics as they are from being the busiest airport in the world,” said Nicholos Venditti, senior portfolio manager at Allspring Global Investments.

Originally, the airport planned to borrow $578 million, according to preliminary offering documents. But that was assuming both 4% and 5% coupons, according to Courtney Knight, the city’s treasurer. Structured only with 5% coupons, the deal generated more premium, allowing the airport to reduce the size of the borrowing to $535 million.

The series 2022A bonds maturing in 10 years are being offered to investors at a spread of 38 basis points over top-rated securities, according to a preliminary pricing wire seen by Bloomberg. That’s wider than when the Atlanta airport sold debt in September -- at the time, the 10 year bonds sold at a spread of 19 basis points.

The airport sector more broadly is beginning to see some spread widening after about two years of decline. The extra yield that investors demand to hold airport munis over benchmark debt has climbed to 0.7 percentage point, up from around 0.3 in April, according to ICE BofA Indices.

“Transportation has value, specifically some airports,” said Peter Cramer, senior managing director and senior portfolio manager at SLC Management. He added that there is still an “overhang” of concern given the coronavirus lockdowns and their effect on travel. “That sector is still recovering, we’re seeing an uptick in travel and it will continue to recover. We think were getting a pretty good discount there from where they’ve historically traded.”

States and cities are beginning to see some stability in the primary market for their debt after one of the worst annual starts on record, providing relief for issuers trying to borrow amid volatility. This year, 13 airports have issued debt, and most were oversubscribed, said Eve Lando, portfolio manager at Thornburg Investment Management.

Spread widening may provide a cushion against headwinds such as slow business travel demand, rising fuel costs and inflationary pressures, especially because any economic slowdown would harm airports more quickly than other sectors, John Ceffalio and Patrick Luby of CreditSights said in a note last week.

They expect parts of the Atlanta deal to attract strong interest from retail and separately managed accounts, and voiced preference for alternative minimum tax bonds because of wider spreads.

The airport’s consultant, LeighFisher Inc., forecasts 45.5 million total passengers boarding in fiscal year 2022, or 83% of the 2019 peak. Boardings are not expected to surpass that peak until 2026, according to offering documents.

Still, some investors see the sector’s gradual recovery in their own travels, bolstering their confidence. Catherine Stienstra, head of municipal investments at Columbia Threadneedle, said that she favors the airport sector. “You walk though the airports and they’re full, people are flying again, overall we’ve been very constructive on that area.”