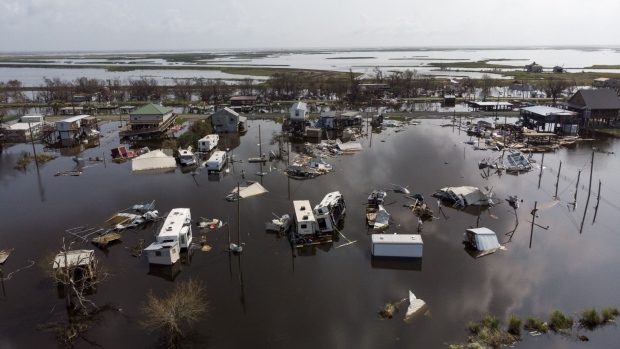 (Bloomberg) -- The Atlantic is poised for its seventh consecutive overactive hurricane season, a worrying forecast for coastal residents as well as energy and commodity markets already roiled by Russia’s war in Ukraine.

Six to 10 hurricanes could form in the Atlantic between June and November, with three to six becoming major systems, the US National Oceanic and Atmospheric Administration predicted Tuesday. In all, 14 to 21 named storms could form -- with the upper end matching last year as the third-most active season. Major storms boast winds of 111 miles (179 kilometers) per hour or more. An average season produces 14 named storms that produce winds of at least 39 miles an hour.

“Early preparation and understanding your risk is key to being hurricane resilient and climate ready,” US Commerce Secretary Gina Raimondo said.

Atlantic hurricanes are especially threatening because they can shake agriculture, financial and energy markets simultaneously. Major hurricanes like Ida last year risk shuttering much in their path. Along with the agriculture and energy markets, storm surges threaten nearly 8 million homes, according to a 2021 CoreLogic report. That represents a potential reconstruction cost of $1.9 trillion.

It is a situation that’s progressively worsening as climate change spurs sea-level rise. In fact, sea levels along the US coast are expected to rise by as much as 12 inches (30 centimeters) by 2050.

Atlantic hurricanes often charge through oil and gas production sites as well as key growing areas for crops. Florida is the second-largest producer of oranges, while the Gulf Coast is the heart of cotton production.

As of February, Gulf of Mexico offshore platforms accounted for 14% of US crude oil production and 1.8% of natural gas production, according to the US Energy Department. More than 45% of US refining capacity and 51% of gas-processing capacity is located along the Gulf Coast. And Mexican energy giant Pemex also has offshore operations in Bay of Campeche, in the southern Gulf.

Hurricane Ida ripped across nine states after it came ashore in Louisiana last year, including flooding northern New Jersey and New York City. The storm showed “no one is immune to these storms,”’ said Deanne Criswell, Federal Emergency Management Agency administrator. “The time to get ready is now.”

Among the reasons for the high hurricane forecast: warmer-than-normal waters across parts of the Atlantic as well as La Nina that’s lingering in the equatorial Pacific. Tropical storms and hurricanes require oceanic warmth for power, while La Nina decreases wind shear across the Atlantic that could tear them apart.

The Atlantic hasn’t had a below-average season since 2015 when 11 storms formed, while 2020 was especially active with a record 30 named storms. Colorado State University, which pioneered seasonal Atlantic forecasting, in April predicted 19 storms this summer. Atlantic hurricane records date back to 1851.

“We’re worried about hurricane season now because hurricane season has taken an entirely new meaning,” New York Mayor Eric Adams said at a press conference. “I want every New Yorker to be ready.”