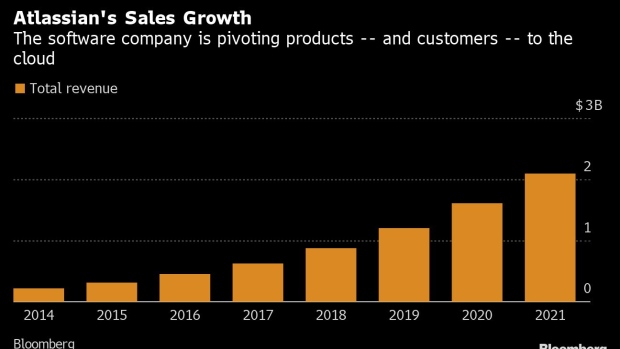 Signage for Atlassian Corp. is displayed in the enterprise software company's Global R&D Center in Bengaluru, India, on Wednesday, July 3, 2019. Atlassian Co-founder and Chief Executive Officer Cannon-Brookes has said the firm will get all its power from renewable sources by 2025. Photographer: Karen Dias/Bloomberg , Bloomberg

(Bloomberg) -- Atlassian Corp. is continuing to show its strength in the midst of a company-defining pivot to the cloud, a testament to the unique niche the vendor has carved out in the increasingly crowded world of enterprise software.

Since its inception, Atlassian, which makes tools to help with software development and workplace collaboration, has targeted developers and groups of employees within a business directly -- rather than spending resources to woo corporate purchasers like the chief information officer. The company, for example, invested early on in making its signature project management tool Jira easy to quickly download and use. That self-service approach has been key to Atlassian’s growth.

“We continue to evolve and get better at that model every year,” said co-founder and co-Chief Executive Officer Mike Cannon-Brookes. “The cloud is even better for that. We have a lot more expansion vectors.”

Atlassian appears to be persuading its customers to jump to the cloud. Sales grew 37% to $688 million in the three months through December, fueled by a 58% jump in cloud revenue, the Sydney-based company said in a statement Thursday. Sales may be as much as $705 million in the current quarter, the company said, exceeding Wall Street expectations.

The shares, which have more than tripled the past two years, jumped 9.7% to $319.17 Friday in New York, the best single-day gain in more than five weeks.

“There still is no other vendor that we can see that is really presenting itself as a viable competitor,” said Mizuho managing director Gregg Moskowitz.

But some hurdles remain. In February, the company is poised to raise prices for its service and data center products, which could spur a backlash from customers. Its code repository known as BitBucket is now under pressure after Microsoft Corp.’s 2018 purchase of GitHub. And as Atlassian continues to invest in its IT services product -- including past acquisitions of Mindville, Halp and OpsGenie -- the company is bound to butt heads with bigger competitors as it looks to expand its footprint within large corporations, a segment currently dominated by ServiceNow Inc.

Most critically, however, are its ongoing efforts to transition customers from on-premises products to the cloud. Such a move would enable Atlassian to more easily pitch existing users other tools, as well as develop new products quicker -- both improvements that could ultimately help underscore higher sales growth.

Atlassian doesn’t disclose what percentage of its end users have made the jump. However, those that have finished the migrations so far are largely small-to-midsize businesses, according to Wells Fargo & Co. analyst Michael Turrin. The real test comes as some of the company’s largest customers decide whether to also take the plunge. And that transition should soon accelerate.

“It’s very rare to run across a customer who does not understand that the cloud is their end destination,” Cannon-Brookes said. “We’ve given long timeline leads, notice periods, so I think they’re clear where we stand.”

Data center subscriptions, viewed as a stepping stone into the cloud, grew 83% to $139 million in the most recent quarter. And more than 98% of the 10,021 new customers Atlassian gained in those three months were for its cloud products.

Atlassian has been working to infuse important compliance protocols in its products to meet data regulations in countries like Germany and Australia, a step that is often a prerequisite for global businesses before adopting cloud-based products. In the three months through December, one-third of the migrations were from data center products, the company said in a letter to shareholders.

That “tends to be the larger, more complex customers,” Cannon-Brookes said.

To help continue to spur those moves, Atlassian has offered customers a 40% price discount. That promotional offering will lower to 20% in June. It’s also raising the price on its products that still run on data centers or servers by as much as 25%, hikes that won’t affect Atlassian’s cloud customers.

“We’re not forcing them down any path,” Chief Revenue Officer Cameron Deatsch said on a conference call after the earnings were released. “It just comes down to timing, budget and prioritization of IT projects.”

Some users may be hesitant to make the move to the cloud. Server revenue in the most recent quarter was $135.5 million. While that is a 12% year-over-year drop and follows several quarters of similar declines, it shows that Atlassian’s on-premises products are still a draw to some customers.

However, Atlassian isn’t ending support for its server products until 2024. And momentum is clearly on the side of the cloud.

“It’s a long-term transition that we are working through,” said Cannon-Brookes.